What does payment:notes=yes mean? That you can buy the parking tickets without having any coins with you? Logictheo 12:21, 17 June 2009 (UTC)

I like the payment:*=* tags, except that the singular form (i.e. coin instead of coins) seems more consistent with other tagging. I'd also like to use the value "surcharge" instead of just "yes" when there is an additional charge for that particular payment mode (e.g. payment:credit_card=surcharge would be a common tag on some brands of fuel stations in the US).-- AM909 23:51, 8 January 2010 (UTC)

Hi, is it possible to use the british top up symbol for the telephone_vouchers vending machines? Actually I don't know where else I should place this request. I talk about this symbol [here] cu AssetBurned 16:25, 30 November 2009 (UTC)

Any ideas how I can tag the combination of a box with dog excrement bags in it and a basket for the full bags below it? That combination is quite common, at least where I live. Both have amenity as key, so I cannot add both to the same node. --holgermappt 21:40, 9 January 2010 (UTC)

Our excrement bag dispensers have waste bins, too - Are there any without? Lulu-Ann

Yes, in Switzerland there are both types: bag dispensers with excrement waste bins (not suitable for other waste) and small, tiny bag dispensers on a pole without any waste bins. Example products: http://www.robidog.ch/de/Produkte/index.php (page in german but pictures are self-explanatory). I would definitely like some sort of excrement_bags:waste_basket:yes (or a simple waste_basket:yes if other trash can be put there too). --Marc 15:39, 11 July 2010 (UTC)

There are fuel stations "open" 24/7 and car washes where's no personnel and where you can pay only with electronic cash. How should they be tagged? Atm I made one node for the fuel station and one for the vending machine, but I think this nodes should be merged. -- Malenki 22:55, 6 February 2010 (UTC) 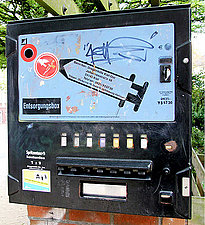 What's with “news_papers” and “SIM-cards?” It's called a newspaper and a SIM card, so the values should be newspapers and SIM_cards. I'm updating the page.

taginfo for vending. People are actually using news_papers somewhat consistently (which is surprising, because mappers usually don't even apply those conventions consistently that actually make sense). This is probably partly due to the fact that there is a JOSM preset for these values. Changing the page won't do much good unless you manage to get that preset changed, too. --Tordanik 18:13, 12 February 2011 (UTC)

Ugh, thanks. Is there a master list of keys & values somewhere for mass-proofreading before submitting a bug report? —Mzajac 22:42, 12 February 2011 (UTC)

What we really need IMHO is an agreement "always use singular" for OSM in general. Lulu-Ann

Relation for linking a vending machine to a service provided ?

A use case of such relation:

Self-service car-wash systems are paid by inserting a currency into a vending_machine, but the service is provided by the amenity=car_wash node.

Proposal for a relation :

There are some vending machines where you can turn in your goods and get money back called ecoATM. Example node 2411544133

Your suggested tagging has the problem that all current data users will mistake them for places where you can buy mp3players, not sell them. In my opinion, the term "vending machines" doesn't fit well here. Perhaps invent amenity=rebuy_machine instead? (Of course, there might be combined buy-and-sell machines, too...) --Tordanik 13:52, 15 November 2013 (UTC)

I think we should combine all vending machines which are vending food by vending:food and adding another tag with i.e. food_type:snacks, food_type:drinks, food_type:bread etc.. I know that this is third dimension ordering but I think it would make the sorting of vending machine much easier, as you don't have to recognize all different kinds of food when you are parsing the information. Also you can find them under the new tag. --Haves (talk) 10:10, 24 January 2015 (UTC)

There are some vending machines which are quite big, like small retail buildings - with the exception that you can't get inside. I think it would not be bad to mark them as areas. However, the wiki page says "should not be used on areas", and JOSM validator complains too. What's wrong with it? --Jedrzej Pelka (talk) 19:10, 30 September 2015 (UTC)

Seems like this would be counter to Good practice#One feature, one OSM element. Unless the idea is that one serves as a destination for someone wanting to obtain the vended item, and the other is to show a large physically occupied area for landmarking and such? Arlo James Barnes (talk) 17:57, 2 May 2018 (UTC)

I just mapped a vending machine as an area, and as building=service. It's a service called "Twice The Ice" and they're very large vending machines that dispense ice and water. Here's the way as an example: https://www.openstreetmap.org/way/924564786 MoiraPrime (talk) 18:49, 7 April 2021 (UTC)

the article refers to this section here but it actually does not exist, so I am creating it :)

Apparently, the most accurate proposition is :

I recently have seen interesting products in vending machines which could be added :

vending machine to load money on a voucher card

here inside a company all restaurants and vending machines do not accept coins or bank notes, but every employee has a NFC card with a payment function. There are (banking-?) machines to book money from your VISA or EC card to the employee card, and vending machines that accept them for payment. How to map? --Lulu-Ann (talk) 11:36, 11 January 2018 (UTC)

How to map a machine which dispense coins and small bank notes in exchange of other bank notes? These are found in train station, parking, laundry, bank, post office. The machine can charge a fee or not. On the machines i've seen, payment is made by bank notes.

I found 4 vending values that match, on taginfo:

The most used value is "vending=coin", but "vending=change" is more representative, some of those machine dispense only coins, some dispense coins & bank notes.

Please find hereafter my proposal for a new value:

NOTE: there is a tag "change_machine=yes" that can be used to indicate there is a automated change machine in an amenity (see https://wiki.openstreetmap.org/wiki/Tag:amenity%3Dpost_office), but a separate node is useful to locate precisely where the machine can be found in a big building (e.g. train station).

There exist containers to drop off lost and found things like wallets, keys etc. (e.g., Austria). They are usually emptied by local authorities and brought to local police stations or lost property offices (cf. amenity=lost_property_office). Strictly speaking, they are not vending machines since you put some things in it instead of money and don't get anything out of it. However, since the term for machines taking back bottle is reverse vending machine I guess we could use it anyway. However, I could not find a proper english term specifically for these outdoor dropboxes. Lost&Found box is mostly described as a small and open container indoors and the british term should contain lost property anyway... I propose simply vending_machine=lost_property.
--Stefanct (talk) 22:47, 14 October 2020 (UTC)

Quite a few farms have a vending machine these days (to avoid crowdedness in the farm shop) Question: should I add amenity=vending_machine to an object which already has shop=farm, or make this a separate object? If add, should I add opening hours for the vending machine to existing tag opening_hours, or keep this in separate tag? I now used "opening_hours=Wo, Sa 08:30-16:00 vending_machine: 07:00-19:00", is this advisable? If separate node should I copy all details which apply to both shop and vending machine (e.g. contact details)? Infodisiac (talk) 07:55, 6 December 2020 (UTC)

Anyone know a good tag for those areas at grocery stores and the like where you park to have your groceries or whatever that you ordered online brought out to you? I don't think this tag works, but it's a similar idea and I can't think of anything comparable to it. I was thinking about something like parking=pickup, but then that wouldn't allow for other parking tagging. Or there's amenity=drive_through, but that doesn't really work either. Since they are parking spots and not necessarily drive throughs in the technical sense. --Adamant1 (talk) 02:09, 22 February 2021 (UTC)

I think the addition of reusable_packaging:offer in this context is extremely suspect and questionable. You can literally refill most liquid containers with liquids from somewhere besides where you bought the container. Just like you can "reuse" a box from anywhere to fill with whatever you want somewhere besides where you got it. Anyone can go to a parcel pickup vending machine, take out a package and reuse the box that it come in if they want to. I don't think those kinds of arbitrary, "applies to every situation" tags are helpful are should be advocated for though. Otherwise, where's the limit? I asked the same question on the talk page of the reusable_packaging:offer proposal page. I think it warrants a coherent answer so the tags don't just get arbitrarily added to everything. --Adamant1 (talk) 22:24, 31 May 2021 (UTC)