This page contains information relating to mapping activity that is specific to Finland.

There is a multi-messenger chat channel. It is accessible via:

Other messengers may be bridged on demand. Bridging technology is based on Matrix and is provided by hacklab.fi.

There is a Telegram discussion group for Finland: OpenStreetMap Finland

There's also an OSM mailing list for talking about Finland specific subjects, as well as own area in OSM forum

On a typical day about 25-35 people are editing OSM map of Finland. 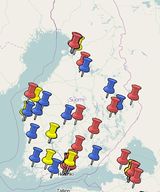 The following, albeit few, guidelines for translating the Wiki pages are in Finnish:

This section describes smallish projects which can be finalised within a few weeks or couple of months with some co-operation.

See page Tietolähteet in Finnish language for a list of data sources. 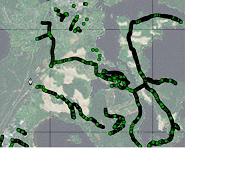 As Finland has two official languages Finnish and Swedish. Many locations and streets have names in both languages. The Sami language is official language in 4 municipalities (Enontekiö, Inari, Sodankylä and Utsjoki) in Northern part of Finland. Use the following schema to tag these.

Coastlines are ways with the tag natural=coastline. They can be imported from an external source. This already done for the whole mainland coastline, but not for all the islands. After import, the coastlines have to be "fixed up" manually, checking that there are no gaps in the ways, duplicate nodes must be merged, and all line segments must be turned so that the water is on the right hand side (i.e. counter-clockwise for islands). Around Helsinki and Turku, some coastlines have been drawn manually in JOSM or Potlatch (or really old stuff in Java Applet).

I ran the coastline import script for Vaasa/Kokkola (more specifically, area from 63° 21° to 64° 24°), and now believe it was very bad idea, the amount of islands (and as such, required manual fixing since each one of them has the segments in wrong direction) along the Finnish coast is staggering, and I do not recommend running the coastline import for anyone else until it has been significantly improved. --Juhaz 13:49, 3 May 2007 (BST)

My plan is to import one piece at a time and then fix up the area (close gaps, turn islands right, render in tiles@home) before I go on to import the next part. I'm beginning with the easy parts, such as Latvia and southern Sweden. I have a slightly improved version of the import script that avoids duplicate nodes and doesn't tag nodes and line segments. I have also started to fix up the Vaasa area. It is tedious work, but it can be done. --LA2 08:50, 4 May 2007 (BST)

I created a program which makes it all easy. You can select an area, and it will create an OSM file which you can open in JOSM for further checkings and corrections. The program also checks closes polygons in which direction the segments are arranged. It considers all polygons as islands and turns the direction if necessary. Here you find it: www.lenz-online.de/divers/osm/

Airports with (some) mapped runways and taxiways.

These have been translated from Finnish to help possible tourists and anybody not familiar with the Finnish language.

Outside urban areas the classification is mainly done by looking at the road number; smaller numbers are even officially grouped into few classes. Larger numbers are not signposted, so sometimes one has to make a decision themselves between the values residential/tertiary/unclassified.

Roads in urban areas often have (unposted) numbers in the five digit range, so there's a second table further down for assessing their importance and classification.

National highways (road numbers 1-999) often end at the city limits or at least well before the city center but not always there are exceptions to this. Most roads inside built up areas in Finland have official road numbers with four or five digits, but the numbers are seldom signposted. Therefore the classification must follow some other criteria, as outlined below. These criterias are for roads with no numbers, for numbered roads you should always follow the rules in above table. There are some exceptions to these rules as sometimes the numbering does not match with the importance, see the city pages for more information.

Here's a small guide to help us with all the different types of footways and cycleways. Most of these are explained with varying details at, for example, Tag:highway=footway, Tag:highway=cycleway, but the examples here depict how to apply these in the common cases encountered in Finland.

It would be nice if you could also include any of the following tags on cycleways and footways, if known:

Total length of linear features with some highway tag: