From OpenStreetMap Wiki
Jump to navigation Jump to search
Tag:natural=shingle - Other languages

Shingle is an accumulation of rounded rock fragments, usually pebbles and gravel, but sometimes larger, deposited and shaped by movement of water. It is used in two contexts: shingle beach and river shingle.

In contrast to natural=scree which results from rockfall and in-situ weathering shingle is produced by water transport. The water flow in a river or the waves at a coast transport and segregate rock fragments and deposit them according to water currents. As a result, the rock fragments are usually well-rounded and lack sharp corners and edges. They can vary in size between millimetres and centimetres. The English term “shingle” illustrates that — due to the water flow — gravel deposits often are aligned like roof tiles.

To map an area of shingle you can just draw a line closing on itself, marking the area of shingle and tag it natural=shingle. To map larger or more complex areas you can use Relation:multipolygon with the same tag. 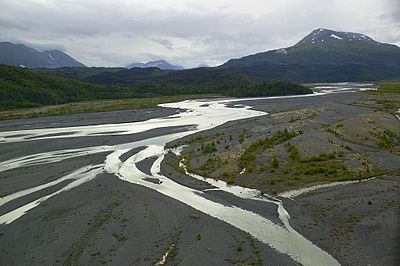 Currently rendered in OSM standard layer like natural=scree in bright gray-brown colour with a dot pattern at high zoom levels.