Yes, if they were put in place as a barrier to some kinds of vehicle rather than just nice-looking traffic calming. --achadwick 17:06, 26 April 2011 (BST)

Barrier=planter was suggested for large flowerpots on the tagging maillist, or man_made=planter and barrier=block. /Johan Jönsson 20:50, 4 September 2012 (BST)

Definitely not: this is quite a specific kind of barrier. See barrier=gate for gates, and barrier=* for lots of different kinds of barrier ☺ --achadwick 17:06, 26 April 2011 (BST)

Does this type of barrier placed on a middle of highway=service for example means that will stop larger vehicles, but will permit bicycles and pedestrian, or some access=* tags are still needed? --mafiainc 23:58, 06 May 2011

Not sure what to say here, though we probably should say something. Adding some access tags is probably a good idea, you can state motor_vehicle=no, for example. IMO, perhaps this should be the default. --achadwick 14:14, 9 May 2011 (BST)

For the obvious cases, each feature, like a bollard, is intended to restrict a certain type or a group of users. Usually third part routing services will create the default rules of such feature. On another hand, a motorcycle'ss restriction may be added to the the bollard or on the way itself (this may change the rendering if a specific code behavior has been integrated).
As for the access tag, it's a shortcut tag for the general access of an element, it should not be used in coordination with other specific access tags, it will confuse how third part services should interpret the combination. It's best to stay simple and harmonize the use of the tags. --SHARCRASH (talk) 13:46, 22 November 2018 (UTC)

I wonder why block barriers are only allowed as points. In reality, large lines of concrete blocks could be placed as traffic dividers or to temporarily shape traffic in a particular direction.

Because usually in line they rather form a wall, like bricks joined together form a wall. In practice it changes how users have to deal with the feature. With a single block on a way, pedestrians, cyclists can still use the way, but let's imagine on a temporary junction as you suggested, blocks in line are often intended to restrict pedestrians also because often there are no other safe features yet installed, for example like crossings. We have to think how each of the feature deals with pedestrians, cyclists, normal vehicles, GHV... since this is for a map.--SHARCRASH (talk) 13:36, 22 November 2018 (UTC)

I don't see why a block way would imply a wall? I'm currently mapping a parking lot in an urban area that is blocked off from an adjacent street with 98 meters of large blocks, each about 1.5 meters long, with gaps between them wide enough for pedestrians and cyclists (but not cars). Mapping each individual block seems silly, but it seems as relevant as any other type of barrier, so should be mapped. And as OP said, if you had them for traffic dividers, that also would imply a barrier that stops cars but not cyclists, and wouldn't be readily representable as individual nodes. --Jtracey (talk) 01:43, 19 December 2020 (UTC)

Is rock also a barrier=block? 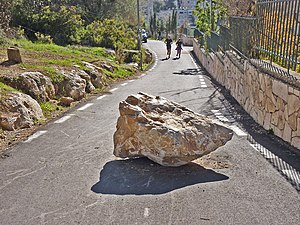 Is rock also a barrier=block?

Personally i did record natural boulders placed purposely on ways as barrier=block. Authorities use them as an easier and cheaper mean for the same purpose. The purpose is to block large vehicles vs allow smaller users to pass in between, have an unmovable barrier for no exceptions in contrary of bollards for example, etc. Just checked back now the description, it does say though: "sometimes natural boulders are used for the same purpose". --SHARCRASH (talk) 18:44, 16 April 2021 (UTC)

Decisive for a barrier=block is the function the structure has, less the form, I think. If the memorial stone is placed in such a way that it blocks a path or an access road for vehicles, then it can (additionally) be a barrier=block. Otherwise as Kovposch wrote. --Chris2map (talk) 19:49, 19 November 2021 (UTC)