What is the term used for artificial grass/turf? (as used in a soccer field). See http://en.wikipedia.org/wiki/Artificial_turf. --Trygve Flathen 22:55, 9 October 2009 (UTC)

I'm tempted to want to distinguish "field turf" from older versions of artificial turf? Does anyone else think it's worthwhile? Dillwead 21:54, 28 June 2010 (UTC)

As a football player I would like to discriminate between '2G astro' and '3G astro'. Third Generation artificial grass is longer than the carpet-like original 2G astro and has black rubber crumbs added to it. A 2G pitch sometimes has sand added to it. The difference between 2G and 3G is noticeable. see https://www.mylocalpitch.com/blog/2g-3g-4g-know-playing-surface Jnicho02 (talk) 18:24, 30 May 2019 (UTC)

One of the examples given 'leisure=pitch;sport=volleyball;surface=sand' for a beach volleyball court seems to be suboptimal and misleading. After all, there exists sport=beachvolleyball, which is not just volleyball played at the beach; they differ by rules, e.g. team size (2 instead of 6).--hagman 12:14, 10 January 2010 (UTC)

Rendering of pitches according to sport

Hi all! What do you think about the rendering of pitches according to the sport tag? I could imagine that a soccer pitch could be rendered something like this a tennis pitch could be rendered something like this, etc. The advantage would be that looking at the map you can see immediately what sport is played on that pitch. What's you opinion? --ALE! 13:19, 21 September 2010 (BST)

I like the idea of rendering the different sports pitches with proper markings. However, some pitches (eg. soccer) are specifically used for a particular sport, but not all have marked lines etc. I think we should have a tag to specify if a pitch have marked lines or not. Any thoughts? --Ascaaear (talk) 11:42, 17 May 2017 (UTC)

Tagging the presence of marked lines would be useful for renderers trying to keep the visual appearance close to the real world, so I would be happy to have that available. Other capabilities that could be added with that kind of tagging:
--Tordanik 13:27, 21 May 2017 (UTC)

Well those French standard paint lines look great, but mislead ground truth (also some of the public don't know which lines are for which sport.) How about at least using some unicode icon, e.g., basketball on basketball pitches. Anyway I am surprised that e.g., that https://www.openstreetmap.org/way/739619566 and the other bigger court to the west look just the same. And the user can't tell if the are a swimming pool, a solar energy field, a compost dump, or anything, without plenty of clicking. See also https://github.com/gravitystorm/openstreetmap-carto/issues/844 . Jidanni (talk) 06:50, 6 April 2020 (UTC)

Quite often there are sports areas that are marked-out for a number of different sports, soccer,(field)hockey even basketball. It's not always easy to tell which. How should these be tagged. At present I'm selecting one. Iain1940

Perhaps use a site relation, tagged with pitch, with areas inside tagged with sport=*, for each sport. Idea is from here. I did this here. --abbafei 2014/3/18

How should one tag a larger area of ground used exclusively for playing sports? One could use leisure=playing_fields or leisure=sports_field. 'Sports_field' seems good because it fits clearly with the 'sport' tag but playing_field is evidently already in some use and would be fine. To be clear, this is different from a situation where there are fixed pitches within an area for more general use which could use leisure=park, landuse=recreation_ground or similar.

In some cases the individual pitches within the sporting area will be identifiable can be tagged using lesiure=pitch with the relevant sport(s) but in other cases the pitches will either move through the seasons or can't be distinguished. Where they can't be identified individually then I suggest that we tag the outer area with a combination sports tag sport=sport1;sport2;sport3 to cover all the sports which are played on the sports-field.

I don't understand how this tag can be used on relations.

However taginfo [is saying] it has 1811 on relations.

Can somebody explain this to me?

Sports hall for a school example

Section Examples contains an example titled Sports hall for a school that is currently tagged as a leisure=sports_centre. Originally it was tagged with leisure=pitch and the tagging changed later (here).

The current version is confusing. I think, this example should either

a) be removed here since this page is about pitches and tagging examples for sports centres don't belog here, or

b) ir should be changed back to what it once was, a tagging example using leisure=pitch (indoor pitch in a sports hall, similar to Indoor tennis court example).

Since in the OSM database we currently have more than 7k objects tagged with leisure=pitch + building=*, and 1.7k of them additionally with sport=multi, I would rather prefer b) to leave it as a documentation for these entries.

I would prefer a) better than b). How to map a sport hall for a school is explaining in leisure=sports_centre. The same feature can not be example here and there with a different tagging. It wll cause confusion. --Daniel Capilla (talk) 21:29, 29 January 2018 (UTC)

I agree that "The same feature can not be example here and there with a different tagging. It wll cause confusion.", but this example was added to page leisure=sports_centre only recently (Oct. 2017), here it was introduced earlier and in the German version already in Jan. 2014. Do you want ro retag the 1.7k objects with this tag combination? --Hufkratzer (talk) 23:06, 29 January 2018 (UTC)

You asked about the examples in this wiki page, and you proposed two options. Well, I would prefer a) for the reasons that I already mentioned. The same example can be here and there, no problem, or only there, but the same feature with different tagging here and there is not a good idea. I am talking about the examples on this wiki page, I don't want to retag anything. I understand your reasons and appreciate your comments. Thank you! --Daniel Capilla (talk) 00:33, 30 January 2018 (UTC)

Since the majority here on this discussion page was for solution a) and the tagging list recommended to use tag leisure=sports_hall for such a hall (details see Proposed_features/leisure=sports_hall) I will remove the sports centre example now. --Hufkratzer (talk) 18:22, 27 June 2018 (UTC)

Mapping as a line (unclosed way)?

Currently the page suggest that it's reasonable to map a pitch as a line from one goal to the next. However, this is not supported by most editors and database users. Overpass-turbo shows only 374 pitche mapped as unclosed ways: https://overpass-turbo.eu/s/MiJ and the text of this page only suggested this option in July 2018, one year ago. So I'm removing the suggestion to map as a linear way: instead a node can be used if the outline of the pitch cannot be mapped. --Jeisenbe (talk) 14:50, 14 September 2019 (UTC)

In the example File:soccer_goals_without_pitch_boundaries.jpg there is a hedge on one side and a line of shrubs or small trees on the other, so that seems to define an area. I am used to mapping in Indonesia where the boundaries of pitches are rather informal, so I would consider that enough information to map an area. --Jeisenbe (talk) 05:29, 5 January 2021 (UTC)

I wanted to remove the example of disused:leisure=pitch from the page, because I'm not convinced that a disused pitch should not be tagged as a leisure=pitch. If the grass hasn't been mowed or the field is poorly maintained, it can still be used as a pitch, though perhaps not as easily. If the fence is locked, that's another obstacle. But isn't it still a pitch? From that standpoint, disused=yes is better. I agree that a completely abandoned pitch should use abandoned:leisure=pitch. --Jeisenbe (talk) 23:48, 14 September 2019 (UTC)

Page Key:disused says "Use of disused as a simple tag is now discouraged (for example disused=yes)." I would not mind if the tagging of disused pitches would not be described here. I don't have the time to investigate that further now, sorry. --Hufkratzer (talk) 19:14, 22 September 2019 (UTC)

disused=yes is superior here. disused:shop=* is used as disused shop is not a shop anymore, it becomes unused commercial space. While disused pitches (at least familiar to me) were usable, just not used. And once pitch is overgrown enough to not be usable disused:leisure=pitch is not a correct tagging anyway Mateusz Konieczny (talk) 16:17, 3 January 2021 (UTC)

How do you actually map the area of this example?

There is currently an example Indoor tennis court that has some issues:

Therefore I propose to remove this example and instead add a new section titled Indoor and covered pitches with text: 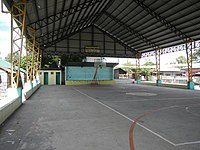 Your opinion? Any objections or suggestions for improvements?

I agree with the suggestion to tag these as separate objects. The wording could be a bit more concise, e.g. like this: If a pitch is indoors or covered by a roof, the building should be mapped as an area, and the pitch as a separate node or area object inside the building outline. This makes it clear which tags belong to the pitch and which to the building. A covered pitch should additionally be tagged with covered=yes, and an indoor pitch might receive a level=* tag. (But I'm ok with your version of the text as well.) --Tordanik 19:41, 29 June 2021 (UTC)

@Tordanik: I like your wording more because it is less complicated, but it doesn't cover the case seen in the photo where the pitch is the same size as the roof. And I am also confused that you propose to use level=* here. Aren't the pitch and the building on the same level? We have no multilevel building here. Did you mean layer=*? This is mentioned on Tag:building=roof, but there are quite complicated discussions about this tag: Talk:Tag:building=roof#layer or not layer? and Talk:Key:covered#What to do with building=roof?. I thought of proposing indoor=* for indoor pitches. It sounds simple at first, but there is indoor=yes and indoor=area. So what is best? --Hufkratzer (talk) 17:38, 30 June 2021 (UTC)

Where do you get that from. Taginfo indicates 1 million of so leisure=pitch with camping site pitches next most frequent value: https://taginfo.openstreetmap.org/search?q=pitch#values SK53 (talk) 12:52, 18 July 2021 (UTC)

Ahem...sorry, I read the taginfo table on the 'possible tagging mistakes' incorrectly. That was the figure for leisure=recreation_ground. I rephrase my initial comment as: "33 amenity=pitch records? That's next-to-nothing." and blush slightly to myself Jnicho02 (talk) 14:05, 18 July 2021 (UTC)

No probs, much easier to check on a PCOf course the latter is not a mistake, but a correction of recreation grounds being incorrectly placed under landuse :-). There is a case for a landuse=leisure to get round that landuse=recreation_ground is overloaded with both meanings, especially in the US. SK53 (talk) 14:08, 18 July 2021 (UTC)