This document roughly follows the chapter order and sub-divisions of INT 1 (the "map legend" of nautical paper charts). The letters in the chapter headings are the chapter designation in INT 1, mentioned here for ease of reference. See the References section below.

References (useful documents of the IHO and others)

Confused yet? ;-) Concentrate on INT 1 if you're not sure where to start with the IHO. The right-most column in INT 1 is a reference to S-4, which you may want to try and follow for more verbose explanations and some useful background information.

General and Miscellaneous (A) (B)

Chapters A and B of INT 1 is mostly stuff we don't need, but there are a few exceptions like "PA" (approximate positions, B33) and local magnetic anomalies (B82). That stuff is supposed to go into this section I think.

Most if not all natural features should already be covered by the Map Features. We might add some pointers here though.

Most cultural features other than bridges should already be covered by the Map Features. We might add some pointers here though.

The individual descriptions and classifications mostly already exist on Map Features. Landmarks are existing features on land, which should already mapped on OSM anyway, so we don't need to add much here as far as marine tagging is concerned.

However, not all features on land can be used as landmarks, because they are not all prominently visible from seawards. For example, one cemetery on a mountainside far away from shore might be easy to make out from its surroundings, while another cemetery very close to the shore might not be visible at all because it's hidden behind a line of trees. Also, some cemeteries may be visible from sea, but are simply not prominent enough to be of use as landmarks.

The decision whether or not an object can be used as a landmark is always a nautical one, and is required for marine mapping. It is never a question of cartographic generalization – in other words, this is not something a renderer could decide on its own. So we need at least one tag to state that a certain object is prominently visible from the water, and perhaps a way to define degrees (i. e. whether or not the object is conspicuous).

The Map Features and especially Harbour have a lot of good work already in place. A definition suggestion is on Talk:Proposed_features/Breakwater. We should attempt to complete, merge and/or add pointers as appropriate.

There are several other sub-sections in this chapter of INT 1, but I'm not sure they have relevance to OSM. Let's ignore those for the time being.

See Water Depth for some ideas around how to gather and store this information.

possible values corresponding to the INT-1

the year where the depth was reported

Soundings should be kept in a separate database similar to SRTM data for land heights.

Nature of the Seabed (J)

discription about the quality of the seabed-surface

can be used as LINE or AREA

additional tags could be:

possible values could be just "yes" or a distinct light-colours.

(status of usage: permanent | occasional | recommended | not in use )

for a usefull description in the map

It is charted using the IHO_INT_1 symbol: P6

A distinctively marked vessel anchored or moored at a charted point, to serve as an aid to navigation. By night, it displays a characteristic light(s) and is usually equipped with other devices, such as fog signal, submarine sound signal, and radio-beacon, to assist navigation. Also called light ship. (IHO Dictionary, S-32, 5th Edition, 2828,2829)

A boat-like structure used instead of a light buoy in waters where strong streams or currents are experienced, or when a greater elevation than that of a light buoy is necessary (IHO Dictionary, S-32, 5th Edition, 2821).

elevation of light given in metres

light-range given in nautical miles

values could be horizontal/vertical

This chapter on lights is one of the longest chapters in INT 1. It contains many depictions and examples. We may be able to find a simpler way of tagging normal lights if we don't use the same section devisions as INT 1 does.

In fact, considering the massive amount of thought people have already invested in tagging schemes for lights, using the INT 1 division shown above for further discussion and division of tags might even be counter-productive. Let's use INT 1 for nothing more than to make sure we didn't overlook something.

(no) is for giving one seamark with several lights an unique identification. e.g. light:1:sector=

(no) is for giving one seamark with several lights an unique identification. e.g. light:1:sector=

This chapter on buoys and beacons is another one of the longest chapters in INT 1. It contains many depictions, examples and special cases. We may be able to find a simpler way of tagging buoys if we don't use the same section devisions as INT 1 does.

The existing tagging schemes for buoys and beacons (one of which is below the line) are differently structured than what's in INT 1. That's not necessarily a bad thing!

In fact, considering the massive amount of thought people have already invested in tagging schemes for lights, using the INT 1 division shown above for further discussion and division of tags might even be counter-productive. Let's use INT 1 for nothing more than to make sure we didn't overlook something.

First decide if it's a buoy or a beacon:

Second we classify the seamark. With only 1-2 Tags we can describe the function of the seamark exactly. There are 5 different types of buoys and beacon. Some of them have subtypes (e.g. for lateral and cardinal seamark. that means the IHO-S-57-category due to what function the buoy/beacon has). Buoys and beacons have the same behaviour in tagging here, so I took mostly the buoys for example (coloured for IALA-A region. in IALA-B red and green is interchanged but the rest is unvaried):

IALA introduced in 2006 on a trial basis a special purpose buoy to mark dangerous wrecks. This consists of a buoy with 4 to 8 vertical stripes of alternating yellow and blue, top mark is either a X or + shape in yellow, with light alternating flashes of yellow and blue in a period of 3 seconds, and might have installed a racon with letter D. This mark have still not made its way into the permanent IALA system, though with the dangers of shipwrecks highlighted by the Tricolor wreck in Dover Straight, which even when having been marked with cardinal buoys on all sides, having a guard vessel pressent, and constantly transmitted navigational warnings was proved not to be enough to prevent collisions with the wreck.

These buoys are not part of the IHO-S-57 standard, but they are common on North America. They are white cans with orange horizontal bands near the top and bottom. Note that INT-1 doesn't have clear symbols for these, and are identified by buoy shape, color and top mark on most nautical charts, if at all marked, and accompanied by a notice about their functions. According to their sub-category they can have a number of symbols and text to indicate their purpose:

buoy=regulatory_prohibited Orange cross within orange diamond; boats need to keep out of this area

buoy=regulatory_controlled Orange circle; there are some restrictions on this area

buoy=regulatory_info Orange square or rectangle; some information for boaters 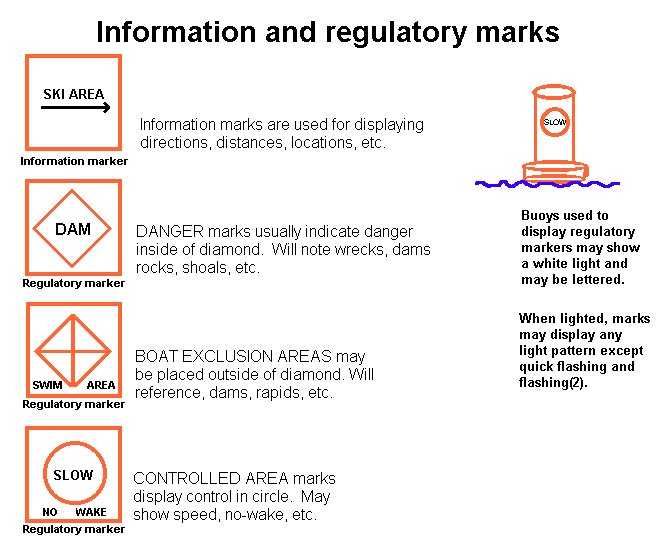 describes the shape of the buoy

could be just "yes" or it describes the shape of topmark: e.g.

could be just yes or a s-57-category value:

length of the signal-period in seconds

could be just yes or a s57-category:

A channel number assigned to a specific radio frequency, frequencies or frequency band.

The estimated range of a non-optical electromagnetic transmission.

The angular distance measured from true north to the major axis of the object.

The frequency of a signal.

The designated call-sign of a radio station.

In the INT-1 list of symbols tide_scale and tide_gauge are considered as signal stations, though this can be argued on an operaional basis as these mostly are passive (waterlevel shown against a bord with a metric scale, for example).

Voting before Clean-Up and Restructuring

Each proposal will seperately be voted.

It seems we're about to change the substance of this proposal, perhaps significantly so. Shouldn't we abandon or at least suspend the vote? Arne Johannessen 23:39, 18 August 2010 (BST)

I agree with Olaf Hannemann. I think this proposal should be split into several smaller parts. It will be easier to discuss and agree and vote on those subsections (e.g. Lights, Buoys and Beacons, Landmarks,...). If we use INT1 as template for the tags, I suggest to prepand all those tags by (e.g.) "int1:*=*". Then we could clearly distinguish seamap (INT1) relevant tags from all other tags. Rahra 11:59, 25 August 2010 (BST)

I have started to make a complete INT-1 overview, currently heavily edited. I will try to include all the symbols scanned, descriptions, and link tags and proposals that could be used. User:Skippern/INT-1 --Skippern 13:09, 25 August 2010 (BST)