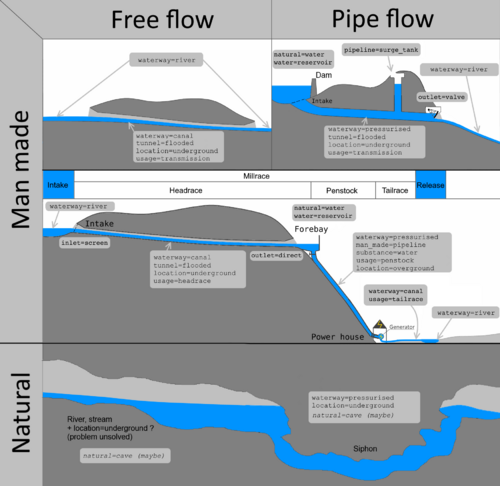 Hydropower systems are intended to convert energy from moving or pressurised water into electricity or mechanical rotating energy. There are many kind of such power plants and sometimes, pretty big infrastructure is needed to carry water from intakes to turbine generators. High pressure pipes leading to generators are necessarily shielded and are called penstocks.
When overground, penstocks are often huge and can be great orientation ways in landmarks.
It's not currently possible to involve facilities which carry water in topological paths using waterway=*. It's an issue since such plants need plenty of water and use to divert a large part of rivers inside penstocks, as seen on picture beside: a whole overground canal goes into 3 penstocks but water disappear unless we look for pipelines.

A tagging model which associate conduit and content will be more clear and versatile to map the diversity of water flow situations.
Thus, this proposal will try to associate waterway=* and man_made=* (or tunnel=*, canal=* keys) for sake of consistency.
The main advantage is to know where water is flowing without taking care of containers like tunnels, canal or whatever. Currently you are forced to.

It's not necessary to know how a hydroelectric power generator works to understand this proposal. It's all about tunnels, canals and pipes.

Usually, waterway=* key refer to free flowing water situations, like rivers and streams, inside tunnels or outdoor. It also needs a value to refer to pipe flowing facilities when raw water from lakes and rivers runs into tunnels and pipelines.
The point is to make a continuation of rivers inside pipelines and involve pipe flow water paths into the already big waterway=* hydrographic system.

It's not possible to always involve pipelines into river relations since water can be sent miles away in other watershed through tunnels. waterway=pressurised will be available to tag any pipe flow feature like water tunnels, penstocks and siphons where water flows without any air.
Furthermore, it may be useful for speleologists and natural underground rivers/siphons out of this proposal scope.

Since waterway=canal is a feature which carries useful water while waterway=drain is intended to remove superfluous water, it is also proposed to tag all free flow water transmission/adduction paths as waterway=canal. Several other tags will be used depending of configurations (free space, tunnels) in which the canal takes place.
There are currently many underground waterways tagged with waterway=canal and this proposal point will prevent them to be edited.

This would lead us to this classification of waterways :

Penstocks are tilted pipes taking water from a high elevation to power turbines. Such pipes should be mapped with existing man_made=pipeline + substance=water + usage=penstock.
Those structures are particular and usually shielded to handle large amount of water flowing at a high pressure. The most the elevation difference is high, the most will be the pressure.
waterway=pressurised applies here.

Penstocks can be really short, leading water from a lake behind a dam to turbines, or kilometres long. Water can go through complex systems of horizontal unshielded galleries (upstream from penstocks) with pipe or free flow operation and they are called headraces.
For underground situations, mappers will choose between tunnels or pipeline, and will only use both on the same object when the pipeline is inside a tunnel.

As said before, it may be possible to involve water feeding infrastructure in Relation:waterway with side_stream role only if all water is took and released in the same river. It's not always the case and waterway=* graph have to be extended with or without waterway relation membership. 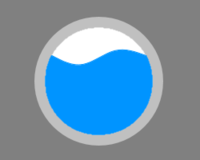 Free flow tunnels use to be mapped with waterway=canal (but not exclusively) and it is proposed to add tunnel=flooded + usage=headrace. This is specific for power generation feeding and usage=transmission should be used otherwise.
waterway=canal sounds to be the most suitable key since a canal is intended to carry useful water while a drain is built to remove superfluous water and aqueduct refer to the whole water transmission system which the canal can be part of.
There is no need to add pressure=* key since water always flows at atmospheric pressure.
Water always goes in the way direction and no direction=* have to be used on such features. Reverse water flowing direction would require to make the tunnel pressurised. 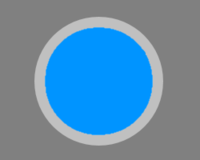 Such tunnels can be whether slightly pressurised or operate at atmospheric pressure. Leading intakes are always below water level as to not allow air to get inside. pressure=* is used to give the nominal static pressure the tunnel is designed for.

Water can be find flowing in a pipeline when not in a proper tunnel or even overground.
Assuming pipe flow headraces pipelines are different from penstocks, the first will be mapped with usage=headrace instead of usage=penstock.
man_made=pipeline and (tunnel=flooded, tunnel=culvert) are set as incompatible. 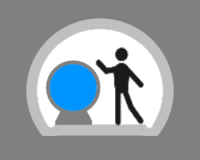 It's not unusual to find actual pipelines installed in dry tunnels where technician can walk along the pipe. Otherwise, tunnels are full of water and are never human accessible when in operation.
Please only use tunnel=yes when the pipeline is human accessible in operation. tunnel=flooded and man_made=pipeline are set as incompatible.

Even if tunnel=* is recommended to render such underground facilities, a pipeline is not a tunnel, both key are used if and only if pipeline is inside a tunnel and a specific rendering solution will have to be found for waterway=pressurised.

Finally, all human accessible tunnels should get access=private (since pretty all of them have access restriction signs on their access gates) and flooded ones should be tagged with tunnel=flooded.

All plants get powered by water going down from intakes to tubrines but some of them can also use power grid electricity to pump water between two lakes at different elevations.
In this particular situation, all pressurised tunnels and penstock (and never free flowing tunnels or open air canals) should get direction=both because water can go alternatively up and down.

When overground, water flows in free surface canals, then waterway=canal is appropriate.
Such canals are intended for a particular purpose, different from navigation. When the canal is located between intake and mill/turbine, usage=headrace should be added while usage=tailrace is dedicated for sections between mill/turbine and water release. 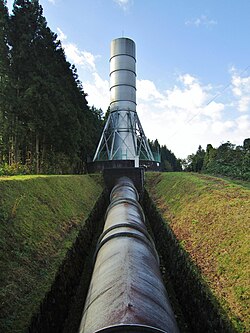 Surge tanks are useful to dissipate the power water is applying to pipes and tunnels when a valve is closed (sometimes brutally).
Depending of upstream (only, not downstream penstocks) tunnels length and diameter, they can be pretty huge shafts like 200m of depth and 20m of diameter - often found in the middle of nowhere.
Overground building can exist sometimes and it may be useful to add name=Valve chamber on it.
Surge tanks is a concept related to fluid flows, not specific to penstocks.

As strategic function of a pipeline system, often at the start point of penstocks, we can map them in OSM with pipeline=surge_tank on a node only, like valves.
Even if such tanks can be huge shafts or chimneys, pipeline=surge_tank should be used on a pipeline node placed at the position of the tank. Visible infrastructure can be tagged with man_made=shaft or man_made=chimney since it can be complex buildings or construction which don't need to be linked to pipeline directly.

For topological accuracy, penstocks, tunnels, or any waterway=* feature should be connected to natural input rivers, streams or canals. The same waterway=* values should be used on additional connections than on source water feature.

Such connection flows have to be added to Relation:waterway relations with side_stream role.
Usually a waterway=dam is built to direct water inside tunnel or pipes instead of natural riverbed.

Spillways need to be distinguished from actual streams or river due to very occasional streams going along it. There is additionally a potential danger for persons crossing or located downstream of such ways.

Spillways aren't intended to preserve rivers flow rate and are only active when special situations occurs upstream of dams. Then it's proposed to map them with waterway=canal + usage=spillway + intermittent=yes and add it to waterway relation with side_stream role.

Pages to be edited

Also referred to as "millrace" or "mill race" (in British English at least).

Then which waterway=* value would be suitable for penstocks or pipe-flow flooded tunels? River, canal or stream wouldn't. Tagging have to be regularly questioned and improved to remains attractive and relevant. Fanfouer (talk) 23:12, 13 March 2018 (UTC)