This proposal aims to clarify tagging of metro stations and lines, in the light of the modern Public Transport schema, and to make the data usable to data consumers. Having all metro systems tagged in a uniform and complete way would allow for making metro schemes and for proper routing.

More than fifty metro networks all over the world have been already mapped as this document proposes.

If you know PTv2 schema by heart, head to the #What This Affects section for a short summary of proposed changes. 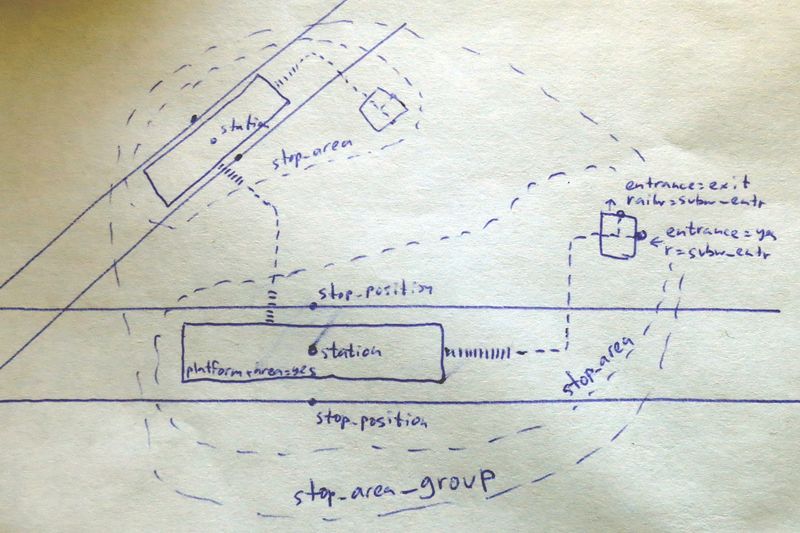 Of these objects, only the station node is mandatory for each station. Also, if possible, mark the subway entrance points, so routers won't bring people to an overground location of an underground station.

Use only a single node

for marking a subway station. No ways, no multipolygons. Three mandatory tags on it are:

You are welcome to add more useful tags, like:

The location of the node is irrelevant. Most often it is placed in the middle of a platform, be it underground or not. This sometimes causes controversies, since the station node is displayed very prominently on most maps, and people mistake it for the overground entrance. There is nothing wrong with putting the node near its entrance: it does not affect routing or anything else.

Overground light rail and train stations can be mapped with polygons. You may also use the public_transport=station tag along with subway=yes or light_rail=yes.

But a lot of optional and highly recommended tags:

If you know the location and length of a platform for a subway station, map it as a way

. If you know the dimensions, you can draw an area or a multipolygon. You can see an example of such thoroughly drawn platforms here.

Use these mandatory tags on a platform:

If you want to map underground passages connecting entrances to platforms and platforms to other platforms, knock yourself out. Do not forget to use layer=-N and tunnel=yes.

The modern public transport tagging schema introduces stop positions: points on rails where trains actually stop. These nodes should be placed on railway=subway/light_rail either in the front or in the middle of a hypothetical train (there is no consensus on that, do as you like). Sometimes you might need different stopping points for different route variants. The point should have at least these three tags:

Please refrain from using the same node for both a stop_position and a station. That would prevent a possible interchange from being mapped correctly.

You can add other POIs for the station infrastructure, like barrier=turnstile and shop=ticket. You should not add any tracks, footways, or bus stops. Use a station name for the stop_area relation name, on interchanges adding a line ref.

An interchange is a station or a group of stations where you can change lines or direction of travel. Technically by this description, most metro stations are interchanges. There are three types of interchanges, pictured above (A and B are lines, not stations):

It does not matter whether an interchange is between differently-named stations or within a single big station. When a group of stations is formally a single station on all of the maps, it is okay to use a single station node, including it into all relevant stop_area relations.

When stations for buses, trains, trams or other modes of transportation are located near a metro station, especially when they are named similarly, do create stop_area relations for these stations (one for each mode) and add these along with the stop_area for a metro station in a public_transport=stop_area_group relation.

Do not add e.g. bus stations into a subway station's stop_area. Make two stop_areas and group these instead.

If you don't know how the underground tracks go, that is okay: just skip this. Tracks are optional.

To make the map a bit more complete, try connecting the stations and doing smooth turns. See railway=subway for a list of tags that go on the tracks. For a light rail tracks, switch subway for light_rail. The railway=light_rail page is not as descriptive, but provides some hints for distinction of subway, light rail and regular tracks.

To simplify future mapping, it is best to draw a pair of parallel tracks. Do not use oneway=yes on these, even if you know in which directions trains usually go. Instead, look at railway:preferred_direction or designated_direction=* keys. Put track numbers in railway:track_ref=* tags if you know these.

These tags are mandatory for a route relation:

When a line has an evident casing on the official map, especially when the line colour is white, put the main colour (of the casing) in colour=*, and the inner colour — in colour:infill=*. This way you won't have a dozen white lines in software that doesn't support infill. For example, colour=cyan + colour:infill=white for London DLR routes.

If tracks are included, they should be sorted from the first to the last stop, and should form a single line without gaps. When a line branches, you should create a separate route relation for the alternative route.

If a relation contains stop positions or platforms, these should belong to stop_area relations, so an algorithm could match these to station objects. Also, each stop and platform should belong to a single stop_area relation, otherwise it would look like a train stops at two stations simultaneously. That means, on type 2 transfer stations that are denoted by a single station node, you would need to make stop positions or platforms for each metro line, and include these into routes instead of the station node.

On type 2 interchanges, adding a station node to routes will not do. Add stop_positions to lines, use them in route relations instead of the station, group each of stop_positions with the station using a stop_area relation, and group these stop_areas in a stop_area_group relation.

All ref=* values for variants of a single route should be equal. That is enough to group these relations. But you can create a grouping type=route_master relation, as per the public transport schema. In that case, you can put ref, colour and network tags on it instead.

Mostly this proposal compiles mapping practices already in use. And improves or clarifies them in these ways:

Note that you don't have to do full PTv2 from the start. Usually it's enough to make two route=subway relations that contain just station=subway nodes and no tracks, for both directions of every route variant.

All of the world's metro systems are validated against this schema, and the results are published on this web page. There are more then fifty that comply. Networks built this way can be integrated into any application to be used for displaying and routing. Source code is open and published on the github.

We are voting to copy this schema to the main namespace of the wiki and make it "official". Also to slightly adjust pages for route, stop_area and stop_area_group relations. See #What This Affects section for an overview of changes and the discussion page for some answers. The results of the voting affects only the wiki: the map is already becoming closer to this schema, since we have the validation website and a few mappers interested in this.

This proposal relies on assumptions what can be legally mapped. There are already operators of subways and underground trams (e.g. Rheinbahn in Düsseldorf, Germany) which imported their tracks into OSM. You should not forget that there are some clever/strange people in OSM who either take lasers, measurement tapes, cameras, LiDaR devices or just there eyes into stations to map them. For example, I tried to improve the alignment of Brussel subway while I used it a lot during SotM 2016. In addition, there are lots of stations whose layout is simple because they are just one level below the street. And even deeper stations can be easy to map, e.g. Wilhelm-Leuschner-Platz in Leipzig. --Nakaner (talk) 21:05, 10 November 2017 (UTC)

I took the liberty to move the list of points to the discussion page and added my comments. Please keep long issues and answers there. --Zverik (talk) 08:13, 11 November 2017 (UTC)

I hate it if people think they can edit someone else's comments. Other users' comments in this voting refer to the issues I raised and it harms readability for future readers. That's why I reverted revision 1523793 by Zverik --Nakaner (talk) 11:01, 13 November 2017 (UTC)