This project has been mapped in 3 cities in Indonesia. The first city was Surabaya (October 2016 - February 2017), the second city was DKI Jakarta (March - November 2017), and the third city was Semarang (February - July 2018). These mapping activities were done by the Humanitarian OpenStreetMap Team (HOT) Indonesia with cooperation and support from the local government such as city government and local disaster management agency (BPBD). 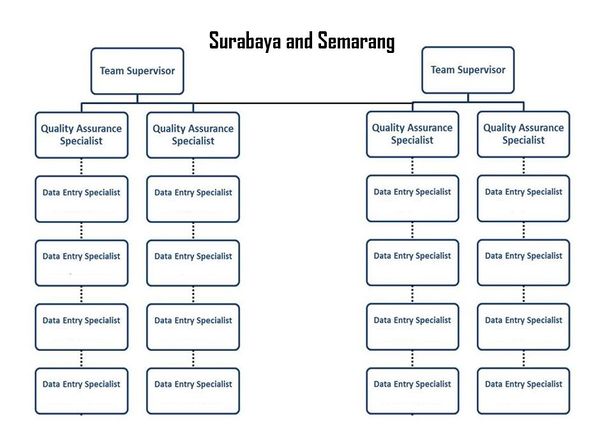 DKI Jakarta had a larger number of mapping team member because of its size almost two times bigger than Surabaya. Therefore, we added 1 Quality Data Assurance and 4 Spatial Data Entry so the total number of the mapping team member in DKI Jakarta was 27 people. They were divided into 2 mapping supervisor, 5 Quality Data Assurance and 20 Spatial Data Entry. In general, each position has a similar responsibility with Surabaya Project. The team structure can be seen as the picture below: 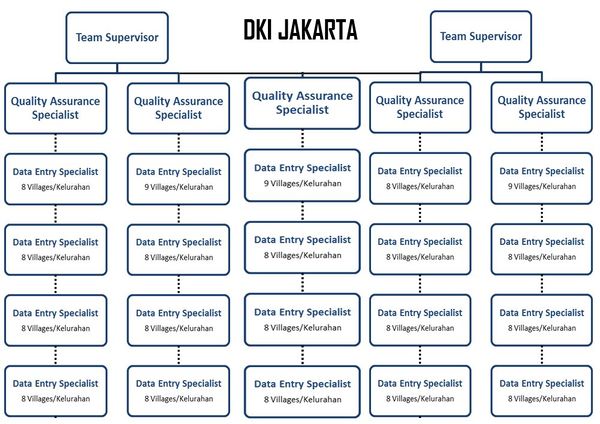 Generally, There are 3 mapping steps in this project.

First step is Import Existing Data into OSM. This data needs to have permission from owner to being published in OpenStreetMap. Usually data that we import was administrative boundary that we got from local government. The purpose to have basic map for survey map and the data will be updated during our mapping activity.

Second step is digitize all building footprint and highway using HOT Tasking Manager. The purpose was to complete all the object before field survey and can be easily edit using OpenMapKit The project was given a high resolution satellite imagery by US GeoCenter so all digitizion result based on good and update satellite imagery.

Third step is Field Survey using OpenDataKit (ODK) Collect and OpenMapKit as a GPS and Printed Survey Form replacement. The team go to the field using motorcycle and survey all infrastructures in their area as well as asking village office representative to update the administration boundary. The process for field survey can be seen in picture below: 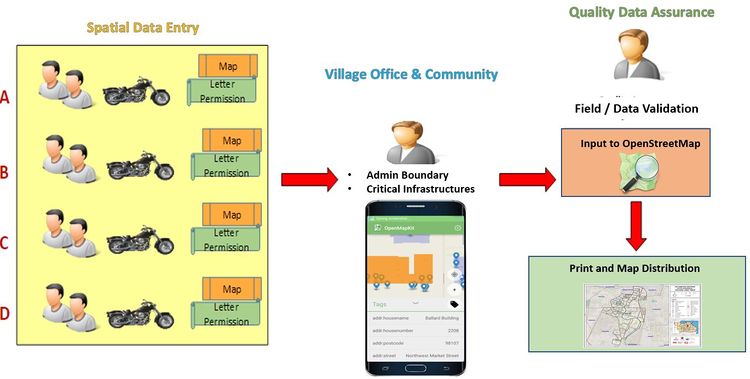 As have been mentioned above, Surabaya, Semarang and DKI Jakarta have different area size. Therefore, it determines how long the mapping activity going. Surabaya with a smaller area than the others area took around 5 months for its field survey area to be completed with the total duration was 6 months. The picture below shows Surabaya Mapping Timeline:

Semarang took a bit longer than Surabaya to be completed. Some factors contribute to this such as area size, city's landscape, and national public holiday for almost 2 weeks. The Semarang mapping activity takes 6 months to be finished. The picture below shows Semarang mapping Timeline:

The longest city to being surveyed was Jakarta with approximately around 7 months to be completed. There were some factors contributed to the duration such as heavy traffic jam, weather, and size of the survey area. The picture below shows a mapping schedule for the city of Jakarta:

There are 4 administrative boundary that has been mapped (add and/or update) during this project.

This is sample of how the administration boundary has been drawn in survey map and rendered into OpenStreetMap. 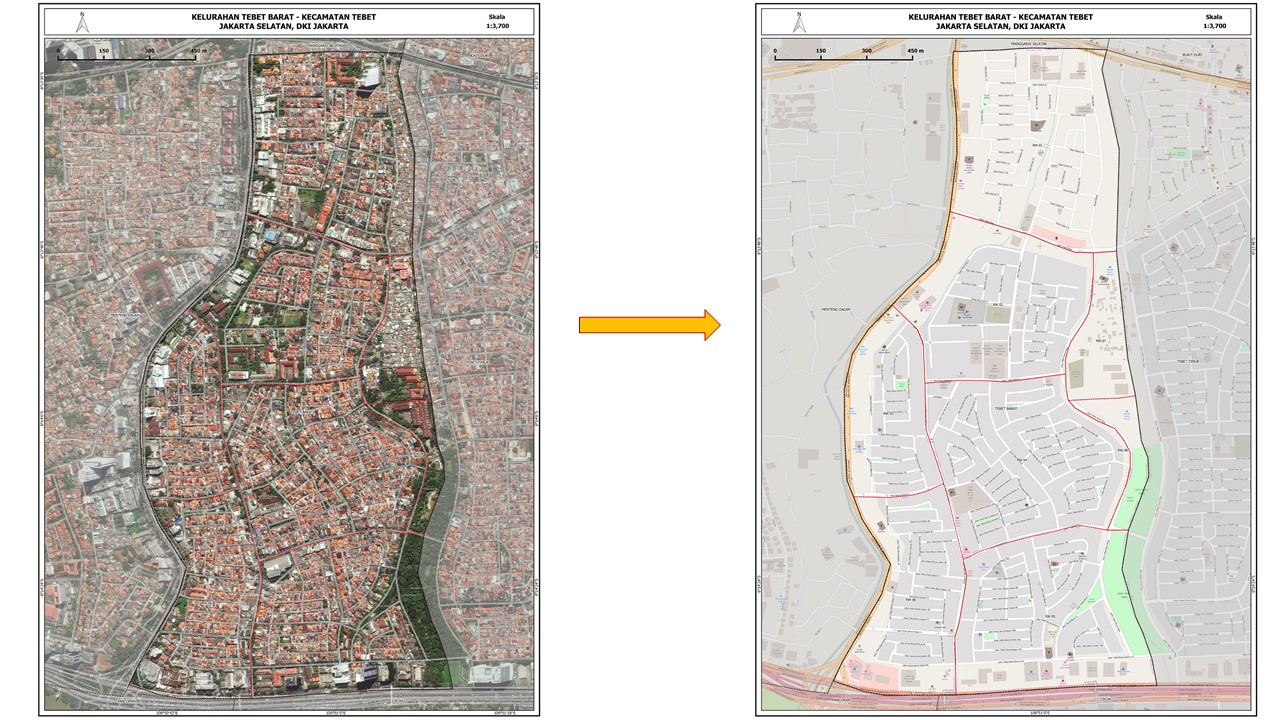 There are 11 critical facilities that become priority objects for PDC-InaWARE Indonesia Project:

Required Key and Value for Any Building Objects for Critical Facilities

There are 12 categories of road that has been mapped (add and/or edit) in this project.

If you draw an object as a line object, you should add some additional information regarding the list of information below:

Statistics of Mapping activities of the project from 2016 to 2018 in 3 pilot cities can be seen in picture below: 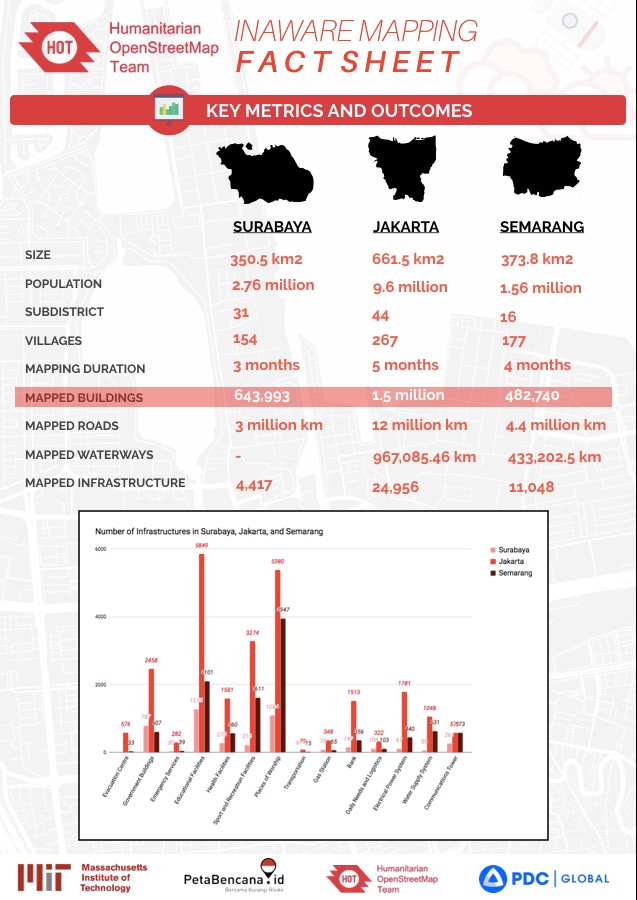