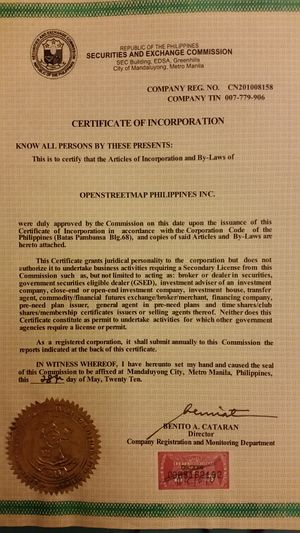 The SEC Certificate of Incorporation

Discussions for starting a non-profit organization started in early 2009 and the incorporation process itself was kicked into high gear in early 2010. On May 28, 2010, the Securities and Exchange Commission issued the Certificate of Incorporation of OpenStreetMap Philippines Inc.

Why form a local OSM-PH organization?

The community needs a formal and legal membership-based organization to be able to engage with other organizations and entities, such as government units and agencies, NGOs, educational institutions, and the media, in promoting and supporting OpenStreetMap activities in the Philippines.

A formal and legal entity will allow the community to be represented, instead of just the individuals and it has other perks like accepting donations, being recognized by LGUs, making press releases, and well basically being a professional formal organizations with a set of defined rules and regulations, officers, board members, etc.

Goals of the local chapter

Who can become a member?

Anyone can join. Being an OpenStreetMap contributor is not a requirement for joining the organization. As long as the person is interested in free and open maps and geographical data, he is free to join the organization.

How can individual mappers benefit from joining this organization?

Question: How does one join the foundation as a member? Thanks. Mark Cupitt

What the org is not

The organization will not be a governance structure for taking charge of OSM data for the Philippines. The data solely belongs to the international OSM community and local people do not have to be an member of the organization in order to use the OSM data.

The organization will not handle data disputes or arbitrate on such matters. The community will be the one to handle it.

The organization is not a licensor of the data. People who want to use OSM data should follow the OpenStreetMap License and cannot ask the organization for special licenses or exemptions to use the OSM data.

The incorporation of OpenStreetMap Philippines Inc. is now done and the Securities and Exchange Commission (SEC) has recognized the organization and given its registration on May 28, 2010.

The incorporators and initial officers are: