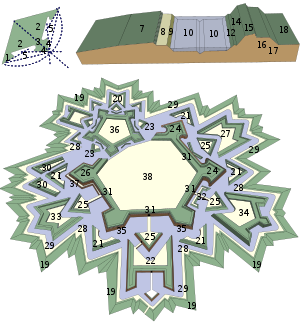 Scheme of a (non-existent) fortress according to the bastioned system with the most important parts and preliminary works depicted. Details can be found here.

fortifications. It is intended for all structures that were built for the defence of territories in warfare. This key replaces several other tags (see #Tagging) and defines tags for defensive structures with an emphasis on user-defined values based on technical terms in fortification engineering.

It is proposed to no longer use military=* for objects that are not or no longer used by a military organisation and are unlikely to see military use in the future. disused:military=* (see Lifecycle prefix) (or military=* + disused=yes) may be used for structures that formerly saw military usage. For defensive structures, if the usage status of the structure is unknown, then it may simply be tagged with defensive_structure=* and/or building=bunker.

advanced work of a fortification. Notable and common types of outworks are

It is proposed to deprecate site_type=fortification and fortification_type=* to populate similar and overlapping keys in combination with the tag ruins=yes.

Although fortifications are a common sight in many parts of the world, many types of defensive structures still lack approved or de facto tagging schemes. Some structures, especially historic ones, are mistagged as other historic=* objects or not tagged at all. Other structures are tagged as military=* features even though military organisations are no longer involved with them.

In external discussions, support was voiced for a change in definition of military=* to exclude objects that are not in use by any military organisation. This has been included in the proposal.

Regarding the discontinuation of bunker_type=*, the nice thing about the military is that form always follows function, so using a single functional tag for a structure (submarine pen, casemate, hardened aircraft hangar) is nearly always sufficient to describe what the structure is as well as how it is used. This means that all bunker_type=* tags can be safely included in defensive_structure=* with the benefits that they may be further specified with technical terms and grouped in a single key together with other defensive structures.

The tag combination of historic=archaeological_site + site_type=fortification + fortification_type=* would overlap strongly with historic=defensive_structure and defensive_structure=*. Archaeological practices may be temporary, but the structures themselves are permanent. Also, the proposed tags are more inclusive in definition than the existing tags and can be combined with ruins=yes to indicate the current state of these features. Therefore, it is proposed to deprecate the existing tag combination.

Individual defensive structures should be mapped as

Nodes in the centre of the structure, as

Ways along a centre line or as

Areas along the outlines. The best fitting method depends on the size and shape of the structure. They should be tagged with defensive_structure=* and may receive additional tags.

If a structure is located outside the principal fortification limits, add the tag outwork=* to the structure.

Structures that are no longer verifiable should only be mapped on OpenHistoricalMap and not on OpenStreetMap.

The following tags for defensive structures are proposed:

The tag outwork=* is proposed as an additional tag to specify whether the defensive structure is an outwork or advanced outwork of a fortification. Proposed values are:

These tags may be used together in cases where a military organisation still uses a structure with historic significance.

Bunkers should be tagged with building=bunker as per usual. The tag defensive_structure=* may be added to specify the type of bunker, such as a

pillbox. For very specific types of bunkers and other structures, consider using model=* as an additional tag.

Several structures that may or have played a role in the defence of a location already have documented tagging schemes. The following tags may be combined with defensive_structure=* in relevant cases, but they are otherwise not changed by this proposal:

The following tags are deprecated (in certain cases) by defensive_structure=*:

Some examples of defensive structures that would benefit from a dedicated tagging scheme:

More examples of where defensive_structure=* would be applicable:

Mention changes on these pages