Mappers should tag lakes, ponds, and reservoirs (which often have similar appearance on imagery) as natural=water. If they are able to further determine the specific type of waterbody, water=* can also be applied. Definitions for three of these values (reservoir, lake, and pond) are described below.

A reservoir is an artificially-created or enlarged body of water created using a dam to store water for human use. Dam, in this context, specifically refers to a man-made structure which allows for human control of the reservoir water level and downstream water flow. (See:

Reservoirs are be tagged with natural=water + water=reservoir.

Reservoirs include the following types:

Reservoirs are used for multiple purposes:

A lake or a pond is a naturally-occurring or artificial inland body of water. There is no precise difference between a lake or a pond. The definitions below are provided as guidelines for mappers to make the determination of which tag to use. Note that some bodies of water may exhibit aspects of both lists; local mappers should make a determination which definition is the best fit.

Lakes are tagged natural=water + water=lake. Lakes, in the context of OpenStreetMap:

Ponds are tagged natural=water + water=pond. Ponds, in the context of OpenStreetMap, are:

Specifically, in this context the term deprecated means:

The 2011 proposal Water details approved the new key water=*. Specifically, it proposed the combination of natural=water + water=reservoir as the replacement for landuse=reservoir. The purpose of that proposal included the following rationale:

This table does not include nodes. There are an additional 50,000 nodes tagged landuse=reservoir resulting from the 2008 GNIS import in the United States which have not yet been traced into areas.

These graphs shows the usage of the two tags over time. There is a clear trend towards the use of water=* tags. The first graph compares way tagging, and the second graph compares relation tagging.

By mid-2016, mappers began consistently favoring the use of water=reservoir over landuse=reservoir. The graphic below shows the difference in monthly change in area tagging between the two tags.

On December 11, 2018, a new issue was opened in the iD editor's issue tracker to change that editor's presets to use the water=* scheme rather than competing alternatives. This change took effect with version 2.13.0, released Jan 23, 2019.

A few months after this iD editor preset change, mappers began consistently favoring the use of water=reservoir in much larger numbers. 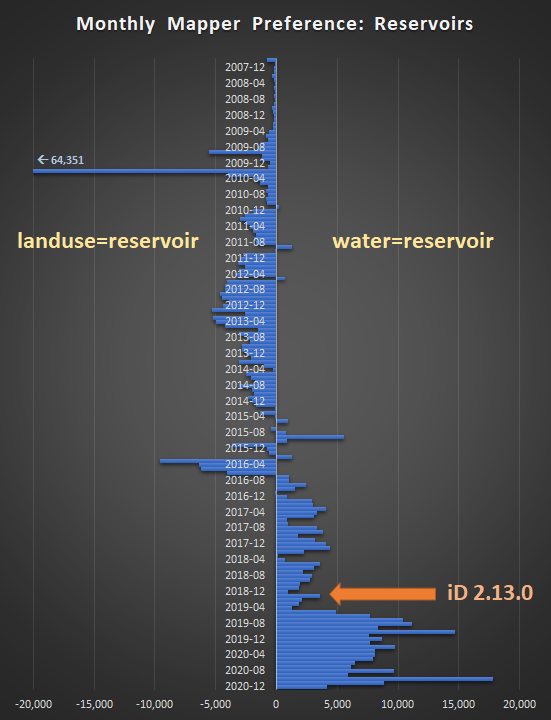 The following listing demonstrates the various types of reservoirs described above.

It was approved with 54 votes for, 0 votes against and 0 abstentions.