From OpenStreetMap Wiki
Jump to navigation Jump to search
Tag:landuse=farmland - Other languages

An area of farmland used for tillage (cereals, vegetables, oil plants and other annual agricultural crops including flowers).

Draw an area around the boundaries of the farmland, and tag with landuse=farmland.

See the tag landuse=farmyard instead to tag areas of land with farm buildings like farmhouses, dwellings, farmsteads, sheds, stables, barns, equipment sheds, feed bunkers, etc. plus the open space in between them and the shrubbery/trees around them.

This tag is sometimes used for tagging every agricultural area (except farmyards). However we also have separate tags for: meadows and pastures landuse=meadow (which is labelled landuse=farmland in the picture), fruit orchards landuse=orchard, and vineyards landuse=vineyard, so many mappers prefer to use landuse=farmland for cropland only.

It is often useful to map the field boundaries within a farm area, especially when many public rights of way follow these boundaries. The use of various barrier=* tags is appropriate in this case. 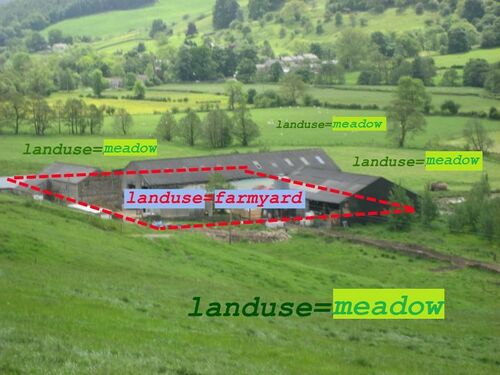