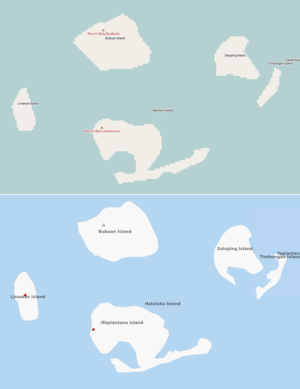 Sawtooth coastlines and the fixed version.

Practically all of the coastlines of the Philippines were imported from a crude coastline shapefile generated from SRTM data back in 2007. The problem with SRTM data is that it has a resolution of about 90 meters and since the data is in a raster format (i.e., pixellated), the coastlines therefore appear as jagged "sawtooth" shapes.

In areas that have high-resolution satellite imagery available, such as in Metro Manila and Davao City via Yahoo!, the coastlines have already been refined and corrected to match the imagery. But in other parts of the country, the lack of high-resolution imagery, the generally low priority attached to coastlines (compared to streets and POIs), and the tediousness of correcting them has led to the sawtooth coastlines persisting for years since the initial import. Furthermore, some smaller islands and islets don't have coastlines visible on the SRTM-derived coastlines or are merged with their larger neighbors. There have been sporadic efforts to refine and correct these coastlines in the intervening years but majority of the coastlines remain uncorrected at the start of 2010.

Currently, there is an ongoing collaborative effort, started in June 2010, to finally refine and correct these SRTM-derived coastlines to better match available data. For most of the Philippines, the public domain Landsat imagery, having a low resolution of around 15 meters (much better than SRTM), provides the best freely-available data for correcting the coastlines. The PGS data, which is a software-based extraction of coastlines from Landsat, is also available and has been post-processed and provided by Ian Haylock for the Philippines.

In a related note, Mike Collinson also imported island and islet names as place=island nodes from the public domain GNS database in around April of 2008. These nodes can be used to help identify missing island coastlines.

Coastlines can be corrected using any general-purpose OSM editor such as Potlatch, JOSM, or Merkaartor. Since there is no good available source of coastline data for the Philippines, OSM contributors are forced to correct the coastlines by tracing available high-resolution satellite imagery or by tracing from the Landsat public domain imagery. Landsat is the default low-resolution imagery appearing in Bing (in areas where higher resolution imagery is not available) and is thus available in all major editors.

An alternative to manually tracing the Landsat imagery is to import the PGS coastline. This is best for smaller islands.

When you improve some coastline, remember to update the source tag. 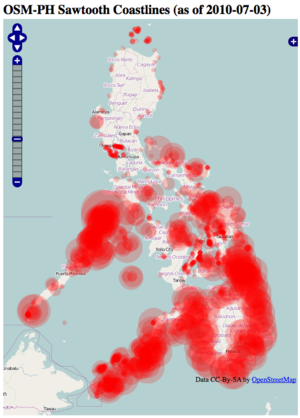 Screenshot of the Sawtooth coastlines webmap.

The data for the webmap is generated via a detection script. The script basically takes an .osm input file then outputs a CSV-formatted text containing the coordinates and the number of "steps" of each detected sawtooth coastline. This CSV text is the one that the webmap uses as input. The script does this by collecting all the ways tagged as natural=coastline and their nodes, then iterating over each way and looking at each adjacent pair of nodes in turn. If there are three or more nodes in a series where each adjacent pair of nodes have the same exact longitude or latitude, then the script flags the series of nodes as a sawtooth coastline and stores the location of the first node in the series and the number of "steps" (essentially the number of nodes in the series minus 1) for later output.

The Philippines have 7,107 islands in all! (Though it is unlikely that all of them would have visible coastlines that can be detected using available sources.) This is a daunting task to complete, hence, we should divide them in order of priorities.

For the ongoing coastlines correction effort, the most important islands to correct are the largest ones. The islands listed below refer to the main islands themselves, not to the surrounding smaller islands.

todo: think of a better way to present this information

Other islands corrected so far: