The _link tags are used to identify slip roads/ramps and "channelised" (physically separated by an obstruction or painted island) at-grade turning lanes connecting the through carriageways/through lanes of highways to other roadways of all types. _link tags should also be used for physical channelization of turning traffic lanes at traffic signal junctions and in roundabout designs that physically separate a specific turn from the main roundabout.

The common link classifications are:

Link roads normally do not have names. Please use the destination=* and its extensions tag to give the cross-street's ref=* and signed destinations such as a city or the name of the destination street, so that routing engines can correctly announce the exit to the "name or ref of the destination street" as you enter the _link. Slip roads/ramps in the UK and USA do not usually have names, and very few of them have route refs. (If they have refs it is usually where an overlap begins or ends, such as US 30 jumping onto I-80 for a double-banded section[1].) 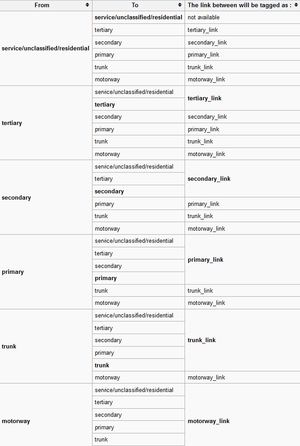 The slip roads/ramps are usually considered to "belong" to the through highway they exit and enter. This is usually the higher classification of the intersecting highways because on and off ramps almost always have the same kind of restrictions as the main road [2], but in some cases this may be reversed.[3]

Some communities (e.g. Russian) do not make distinction between links and main roads in status selection. It usually results in a link tagged by a lower classification of the intersecting highways, though in some cases link status can be even lower.[4] 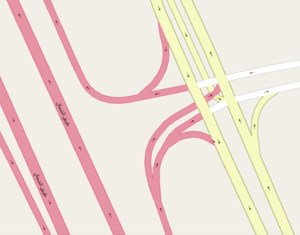 Internal and external highway links in Qatar. They take the highest classification they go to.

Note that a regular surface road may be used for the same purpose. A preexisting street used to connect two major highways is not a link. Instead it should be tagged as the normal highway it previously was, probably equivalent to the lower classification of the ones it connects. This also applies where otherwise minor streets connect highways at an interchange.[5]

Links are also used in roundabout designs that physically separate a specific turn from the main roundabout.

There are also physically channelized turning lanes in the central reservation/median of dual carriageways/divided highways.[6] They should be tagged with the _link classification of the highest classified road they connect to.

Check this table to understand how you can connect different highway category.