Japan tagging is a guideline for tagging Japan-specific features. See Map Features for common features not explained below. See also Japan for basic information. JA:Naming sample and JA:Howto Map A will be also the reference for examples of tagging.

Unlike general articles, the Japanese version is the original for Japan tagging. If you want to change the guideline, please ask on talk-ja mailing list.

In Japan, there are pre-defined tags for each element -- these are listed in the "Implies" column. If a road does not match that column, tweak the relevant tags. 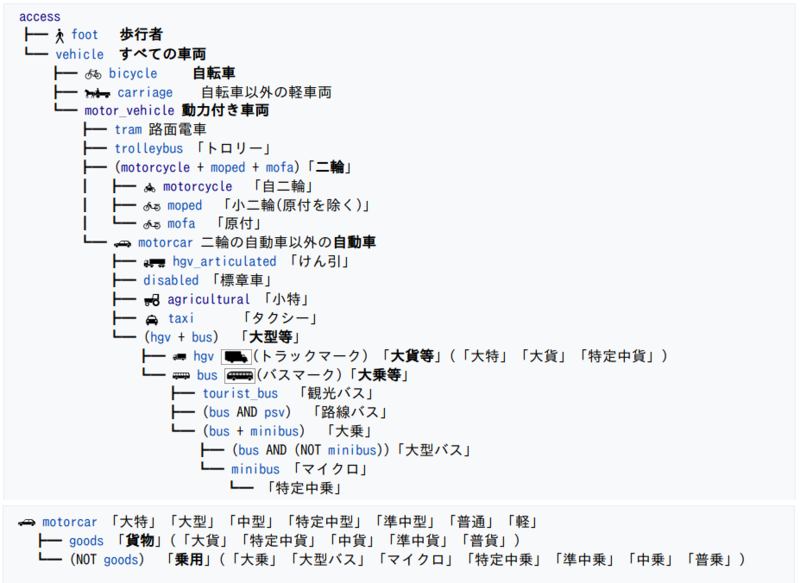 Usage of place=* for Japan tagging.

This section explains place name formats for below tags.

This section refers to 大字 as "quarter name" and 小字 as "neighbourhood name."

Place names like「八幡一丁目」(Hachiman 1-Chome) often occur when the chome is the town name itself. Therefore, attach the tags place=neighbourhood+name=八幡一丁目. It is incorrect to interpret the town name as 八幡 (Hachiman) and the neighbourhood as 1丁目 (1-Chome).

There are some cases where quarter names and street names are named after neighbourhoods like 「字丁目」, for example in Yokohama and Matsudo City. The generally it is not possible to distinguish between them. In this case, the general rule is to connect the town and street name in the place=neighbourhood data entry。

Use of Kanji in Chome

(This section only refers to when tagging something in Japanese) In accordance with article 260, section 2 of the Local Autonomy Law, chome 「○丁目」(o-chome) are written using only kanji. In areas where non-kanji numerals are used, such as Hokkaido, the chome should be specified as「○条○丁目」(r-jou o-chome) using the numerals which are used in the region.

Quarter name「大字○○」(Town Name oo),「字○○」(name oo) place names, the「大字」and「字」can be left out. In this case, the abbreviated name can be placed in name=* and the complete name can be entered into official_name=*.

In areas that have undergone municipal mergers, there are place names bearing the original names of towns or villages that existed before the merger. For example, for「郡山市安積町長久保一丁目」(Nagakubo 1-chome, Azumi Town, Koriyama City) you would use the tags place=neighbourhood+name=安積町長久保一丁目. On the other hand, in another example「郡山市日和田町広野入」(Hirono-iri, Hiyodacho, Koriyama City), the quarter name is place=quarter+name=日和田町 and the neighbourhood name is place=neighbourhood+name=広野入+official_name=字広野入. Please refer to the information published by the municipality to determine whether a place name is a quarter name or a neighbourhood name.

Place names including 区 (ward) also exist. For example in 「姫路市広畑区富士町」(Fuji-cho, Hirohata-ku, Himeji City), 「広畑区」(Hirohata-ku) is not a government designated ward. In this case, use the tag place=neighbourhood+name=広畑区富士町.

Neighbourhood Name Only Existing in the Registry

More examples of tagging various place names can be found in a spreadsheet.

Notice: The following descriptions are out of date as of August 2022.