Electrification, tracks per line and train protection in the Netherlands Source: http://commons.wikimedia.org/wiki/File:NL_ATB_ETCS.png

Below you will find a description of the Dutch railway system and a guide (tagging scheme) on how to cope with it while mapping. Like on the general ORM tagging page, this chapter is divided in the several parts that together form a system which we call 'the railway network'.

All OSM railway tracks in the Netherlands are imported from the databases of the infrastructue manager ProRail. The databases are country-wide, so consequence is that all tracks are present. Tracks with this source are tagged with at least the following tags:

The last two tags might need some more explaination. Both tags help with keeping the OSM information up to date. When a stretch of track is changed, the ProRail databases provide a new version of a rail branch while the unique identifier of the rail branch stays the same. Moreover, a rail branch may contain several subsequential ways of which one or more are changed. The combination of source:date and both references ease the implementation of future updates.

Track usage is tagged according to the so-called Hoofdrailnet (EN: main railway network). This part of the Dutch railways is officially specified as the core of the network (with consequences for contracts). In OSM it provides a useful distinction between main lines and branch lines. The only exception is the so-called Betuweroute (do not confuse with Betuwelijn). The Betuweroute is a freight-only corridor from the Rotterdam harbour to Zevenaar (at the German border).

Outside the passenger tracks, the Dutch railways are not tagged with 'usage'. Instead, tracks are given a 'service' tag. This because of the Dutch definition of spurs. As soon as a train leaves a passenger track, it is either on a yard (emplacement), siding (wachtspoor), spur (raccordement) or crossover (overloopwissel). Again, the only exception is the Betuweroute railway.

The only official high speed track in the Netherlands is HSL-Zuid (high speed line south). The track has a different operator, named Infraspeed.

Railway lines and their respective tracks are referred to in various ways. First of all, every Dutch railway line has a certain 'geocode'. This is ProRail's referencing system that gives all Dutch areas containing railway tracks a certain number. Some geocodes are split in several subsections, which causes the addition of an a, b, c, etc.

Along with the geocode reference number comes a geocode name. The geocode name is simply a description of the area (and thus not a track name).

Some of the Dutch railway lines have names that are more common than the previously mentioned description tag. Examples are Hanzelijn and Twentekanaallijn. These names are added with the name tag.

The Dutch railways use the standard track gauge.

An overview of the Dutch electrification systems is presented.

The 'tracks' tag is unnecessary in the Netherlands. It shows the amount of tracks that a OSM way represents, but all Dutch tracks are present as individual ways.

The passenger lines tag is (to some extent) a neighbour of the tracks tag. It shows how many tracks a railway line contains.

ATB is the Dutch 'Automatic Train Influencing' (Automatische Trein Beïnvloeding) system. It van be categorised as a so-called legacy system and is the default signalling system in the Netherlands. In contrast to that, some railway lines are equipped with ETCS. This section shows how to tag these systems. An overview of railway lines and their train protection systems can be found at this [1] wiki page.

Compared to other native signalling systems, ATB signals are relatively simple. It incorporates a singe standard with almost no exceptions throughout the country.

The ATB main signal consists of three lights and has the possibility of a so-called number box. The three upper lights are always green, yellow and red. The number box contains a matrix of white lights. All lamps are capable regular or flashing light.

In OpenRailwayMap, the main signal is displayed in the signalling layer without its number box.

The number box (if present) is depicted in the maxspeed layer. Its tags are added as follows:

Overview of the various signal functions

Permissive signals can be passed on red aspect / power outages, if the train driver is unable to communicate with traffic control. Such an action requires driving 'on sight', with a maximum speed of 40 km/h. Note that signals that are part of an interlocking are never permissive.

Permissive signals are tagged with railway:signal:traversable:type=on_no_contact_on_sight.

The distant signal looks similar to the main signal, but is tagged differently.

The distant signal may have a number box. If present, it is depicted in the maxspeed layer. Its tags are added as follows: 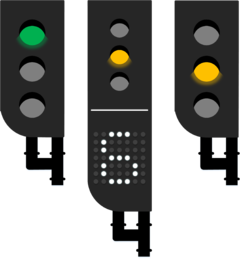 At certain locations, it is important to notify service personnel about incoming trains. This happens by means of four different mechanisms:

All such mechanisms are, for now, being imported with the following characteristics:

When a train departs at a Dutch station, it needs two types of clearance before doing so. First of all, the interlocking signal should indicate that the route is set. Second, if a departure signal is available, it should be lit before the train departs. In this way, the traffic controller can clear a train route without immediately sending the train away from the station.

One platform may contain multiple departure lights. This might be necessary at long and curved platforms. In this case, the reference number has the addition of /1 or /2 or /3 etc. for the various 'copies' of the signal.

For now, departure signals are being imported with the following characteristics:

Start of the cab signalling.

End of the cab signalling.

The ETCS stop marker can be found in two different layouts, in the Netherlands. The first option is similar to the French TVM stop marker and is tagged as:

The second option is only present at the Betuweroute railway and complies with the German standards. These signs can be tagged as:

This signal is unique for the Netherlands. It combines a regular ATB (main) signal with an ETCS stop marker. This combination is used at lines with dual signalling, where ATB and ETCS are active simultaneously (like Amsterdam-Utrecht). The signal displays a colored aspect for ATB-protected trains and a strip of white lights for ETCS-protected trains.

In the Netherlands, so called hectometre signs are used. They show the distance in kilometres, from a certain reference point. Reference points are located at the start of railway lines, or at intersections.

ProRail has a semi-public dataset, which on request is allowed to be published on OSM, with all hectometre signs in the Netherlands. These hectometre signs however, are placed at the centre of their railway line (a railway line can contain several tracks). Milestones should however, according to the international ORM tagging scheme, be mapped as nodes on their respective OSM railway tracks. Regarding this fact, imports from the ProRail hectometre sign dataset should never override correctly mapped hectometre signs that were already present.

The Dutch railways incorporate the following types of electrification signals. Mapping these signs (and thus developing the tagging scheme) has less priority.

In the Netherlands, the following speed limitation signals are applied. These signals are also not implemented on OSM / ORM yet.

Dutch railway operators use, among stations, additional nodes in their timetables: so called dienstregelingspunten (timetable points). These consist of shunting yards, freight yards, bridges and intersections/joinings and help to achieve a better timetable.

In English, the word 'Operating site' is quite comparable. Keep in mind though, that timetable points are more specific: fewer possible types of nodes and a specific purpose for timetabling.

All Dutch operating sites are already findable on OpenRailwayMap.

These facilities are used to feed power from the grid into the catenary wires, allowing electrical traction. They convert the specific type of grid power to the voltage of the catenaries using a transformer. This holds 1.5 kV DC in most of the Netherlands and 25 kV AC for the High Speed Line South (HSL-zuid) and the Betuweroute (which is a dedicated freight line from Rotterdam Eurogate towards Germany). The 25 kV AC lines allow more spacing between the substations and from the Betuweroute it is known that autotransformers are used, which are a specific type of power transformers. ProRail therefore considers the substations at the Betuweroute as a separate object category called 'AutoTransformerStation'. The 25 kV AC substations at HSL-zuid are managed by Siemens through Infraspeed. Infraspeed is the separate infrastructure operator for HSL-zuid and is a governmental body.

Jumperings are the backup system of the electrical traction system. Their name in Dutch (translated as 'switch sites') already makes a suggestion towards their function. In a normal situation, the jumpering disconnects the influence zones from the two neighbouring substations. When a substation cannot deliver power to the catenaries (for whatever reason) the switching station connects the electrical circuit of the disconnected substation to it's neighbour. In this way, all sections remain powered more or less. 'More or less' because the temporary increased substation interval causes bigger voltage drops between the substations, limiting trains in their traction.

Sporenplan.nl contains thorough schematic drawings of allmost all railway tracks in the Netherlands and is the Dutch counterpart of Gleisplan.net. Their detailled drawings even contain signals, track references and switch types for example. Sporenplan.nl has been contacted about usage of their drawings and provided permission to use the drawings for OSM mapping.

At OpenOV.nl, free to use Dutch public transport data is stored. The ProRail section contains very interesting information. For example, a map all Dutch rails (literally every known track) and their speed limits, can be extracted and rendered in QGIS. This QGIS file is available on request, through user talk.

ProRail has a lot more information to offer, which can freely be used by OSM/ORM mappers.