A harbour (also port, North American English Harbor) is a place where ships, boats, and barges can seek shelter from stormy weather. This article describes some of the many features associated with a harbour and the approach from the sea. 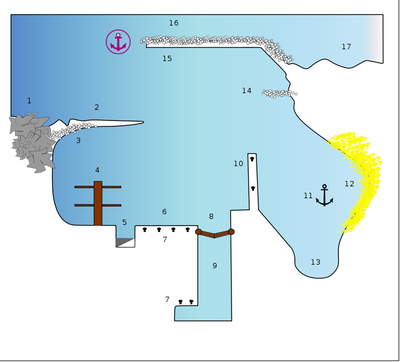 Every harbour should be marked with node tags to which all related properties are assigned as detailed below.

The harbour basin is surrounded by jetties or piers but should not be tagged as a separate area of water. To contain that many properties a new namespace harbour: is used.

The name=* should be the set to the official name for the harbour in the local language. An alternative name can be put in alt_name=*. Names in other languages can be put in name:de, name"en, name:fr etc.

All fixed walls associated with a harbour should be mapped as being part of the natural=coastline or waterway=riverbank. These include external and internal harbour wall, wharfs, for every masonry pier and unfortified shores. Lighter elements, such as footbridges, rafts, landing-stages are deemed to be part of the sea rather than defining te edge of the sea.

The coastline can be divided into separate segments with appropriate tagging, a pier may, for example, have two different tags on either side.

A harbour contains and has many associated features. Here are details of some of them:

A breakwater is a solid or nearly solid structure used to reduce the power of the waves within a harbour or to reduce coastal erosion. A breakwater in OSM is defined as "stand alone" (no connection to the shore - if a wave protection building is connected to shore, see Groyne). It is not normally possible to to walk on a breakwater and that are not used to access moored boats. Use man_made=breakwater. 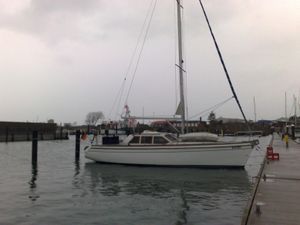 Dolphins marking out a mooring

A dolphin is structure made of wood, metal (sometimes with hard rubber covering) or concrete sticking out of shallow water which can either serve as markings of navigational channels to mark shoals or as an extended mooring for vessels to extend a pier. Proposed tagging for a mooring 'dolphin' is as a node with seamark:type=mooring ; seamark:mooring:category=dolphin

The harbour entrance is how boats and ships enter the harbour. This is not explicitly tagged but is likely to have navigation bouy=*s nearby and may be formed from a combination of the natural=coastline and man_made=breakwaters.

A groyne is a timber structure or a linear pile of rocks stretching across a beach a short distance into the sea to reduce erosion. These should be tagged with man_made=groyne.

A mooring is a place where boats can be fastened to a fixed object such as a bollard, pier, quay or the seabed and should use mooring=*. Moorings may be alongside a man_made=pier, on a sea wall or as a floating mooring buoy=* attached to the seabed. The mooring tag should be added to the relevant feature. In the case of a sea wall then the natual=coastline itself can be used. Do however be very careful when doing anything to the coastline as it can cause difficulties if the coastline gets broken.

If it is a permanent anchorage it can be complemented with the name of the vessel mooring:name=* respectively mooring:operator=* for the operator.

A pier (also jetty, landing stage, footbridge) is a wooden or other solid structure on metal,wooden or concrete legs or floating which is used for the mooring, loading and unloading of vessels. Larger pier can include buildings and possibly amusement arcades all build on columns out over the sea. Piers should be tagged using man_made=pier. Use a linear way for narrower ones used to access boats and areas for larger piers with buildings. A floating=yes if the structure floats on the water

A quay is a length of coast designed to allow vessels of some size to moor alongside the shore. In an industrial harbour a quay may have cranes and facilites to unload cargo. For passenger vessels it may have facilities for passengers to embark. A quay will normally be tagged as part of the coastline natural=coastline.

In a scheme analogous to man_made=pier, a quay may be modeled by tagging a section of the natural=coastline as man_made=quay.

A slipway is used to launch a vessel and consists of a ramp or a carriage on rails. It continues under water until the water depth is reasonable. Tag with leisure=slipway and optionally also operator=* and operating=* ( hand | car | cable_winch | travellift ). Further information:o Ship launching, boat lift, Travellift

A pontoon is a huge anchored harbour facility or a moving swimming, sometimes self driving working platform.

-- Question: should we map moving things? I suggest we only do if in practice it does not move. What tagging should be used for this feature? PeterIto 00:12, 8 June 2011 (BST)

Only permanent routes are mapped. They begin at the start harbour via stopover harbours to the harbour of destination. More than one route on a passage is connected between the junctions to one node.

For Editor JOSM we have comfortable preferences for editing all relevant objects in harbours. The preferences are very detailed; the user can edit the most important data like a checklist.

To use the "Harbour" preferences: