A bus departing a transfer station on the Linha Verde in Curitiba, Brazil

Bus rapid transit (BRT), also called a busway or transitway, is a

bus-based public transport system[1] using dedicated roadways for buses. Busways give priority to buses at intersections where buses may interact with other traffic. These systems have design features which reduce

Sometimes, these roadways are referred to as "fixed guideways" by government agencies,[2] but should not be confused with guided busways, which use rail-like guides or tracks rather than ordinary paved roads. Additionally, this tagging does not apply to painted bus lanes on public roads or transit malls, even though they are also commonly referred to as busways.

Why this proposal is necessary

In addition to making it impossible to differentiate between busways and bus-only service roads, the current tagging schema for busways involves the use of highway=service (as implied by Tag:service=busway). The definition of highway=service is as follows:

Busways are distinct (or why a new highway=* tag is needed)

Some have suggested using other existing values of highway=* (such as motorway or trunk) for busways, whether it be because they have similar physical geometry, or similar functionality (except for the fact that they are bus-only). While their physical similarities are irrelevant as per Proposed_features/Highway_key_voting_importance, there is still debate to be had on whether busways fit within the definition of existing definitions for values of highway=* based on their similar functionality. The crux of the issue is that the road classifications as defined on Key:highway are left deliberately vague, as tagging conventions for public roads vary depending on country.

In other words, tagging busways as if they were public roads would either cause unnecessary variance in the tagging for busways, or require the overriding of local tagging conventions for traffic roads.

Even in the latter case, where local tagging conventions are to be overridden in specific contexts, the dominant tagging scheme would still be ambiguous to which value of highway=* would be correct (assuming values other than service are meant to be used). As it stands, those advocating for this solution have not been able to agree on whether motorway, trunk, or tertiary would be most appropriate, or whether the correct tag should depend on the road.

In any case, reusing existing highway=* values when defining the proper tagging convention for busways would inevitably only increase the level of inconsistency, there by making it more cumbersome to process map data.

A busway incorrectly tagged as highway=bus_guideway, either due to confusion about the current tagging schema, or due to a user tagging for the renderer 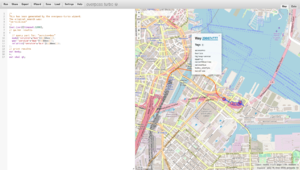 As of this writing, this busway is incorrectly tagged with service=bus, instead of the currently accepted service=busway. (290074777

This tagging scheme is often incorrectly used to describe transit malls (also often referred to as busways), where in that highway=service is applied where highway=residential or similar tags may be more appropriate.

The redundant tag service=busway was added to make busways more easily identifiable. However, because this tag is ultimately redundant, and because it is only inconsistently applied (often confused with the unaccepted tag service=bus), it is ultimately unreliable, especially for applications such as rendering.

How this proposal was written

The definition of busways as written in #Tagging was carefully written to handle edge cases, as well as avoid relying on access restrictions to define busways.

Lack of a busway_link tag

This proposal initially included a highway=busway_link tag to apply to slip roads/ramps connecting to busways. This was removed after the community at large presumed that any bus-only link road connecting to a busway would only be a part of said busway.

Busways do not easily fit within the established hierarchy for highway=* tags, as they are more analogous to instances of railway=light_rail, and they exist outside of the road network meant for automobiles (and therefor, outside of the road hierarchy meant for automobiles). In other words, trying to establish the position of busways is like trying to numerically sort a set of complex numbers: different methodologies yield different results, and there is no definitively correct answer.

However, because highway link roads rely on this hierarchy, an arbitrary hierarchical position for busways would need to be established.

Originally, this proposal assumed that any bus-only link road connecting to a busway would be a part of said busway, which would imply highway=busway to be hierarchically above highway=motorway. This proposal was later revised to apply the same assumption to motorways: on-ramps and off-ramps connecting to a motorway are always a part of said motorway. In other words, the arbitrary hierarchical position of highway=busway is above highway=trunk, but below highway=motorway.

The TransMilenio Troncal Americás in Bogotá, Colombia is a 13 kilometer long median-aligned busway that is physically separated from motor traffic, except at intersections.[4] This is an example of a roadway that would be tagged with highway=busway:

The tag highway=busway should be applied to carriageways that maintain a high level of importance specifically for bus passengers, but are not meant to be used by motorists, pedestrians, or cyclists. In other words, this tag should only apply to roadways used for passenger transport. Currently, such roads are usually tagged with highway=service + access=no + bus=designated.

The tag highway=busway should not be applied to bus-only roadways that are used only for docking.

Use highway=busway also for link roads (sliproads / ramps) leading to and from the main carriageway, as well as for "channelised" (physically separated by an obstruction) at-grade turning lanes connecting the through carriageways/through lanes of the busway to other minor roadways. The table illustrates which highway=* is to be used when mapping link roads connecting to busways. Do not apply highway=busway to any bus-only link roads that does not actually connect to the carriageway of any busway corridors.

The tagging highway=* + access=no + bus=yes is used to describe any type of bus-only roadway that does not meet the definition of highway=busway or any similar tags.

Some busways share a right of way with tramways/light railways, often being referred to by the more-general term "transit way." These transit ways mapped as any other type of roadway with embedded tracks would be (as per Trams#Embedded_tracks):

The following features may allow access buses while restricting other forms of traffic, but they should not be tagged with highway=busway:

The result is Approved with 36 votes for, 5 votes against and 1 abstention.

Thank you for updating your reasoning for voting no to be more detailed. I deliberately avoided relying on any specific definition of the term "bus rapid transit," as it is a notoriously vague term, often subject to having its definition changing on a whim depending on political needs, so I do not know how to differentiate between "true BRT roads" and "regular roads that happen to have signs for bus-only and that connect to the regular road network." In a conversation about this elsewhere, you shared 345276580

345276580 as an example of a "bus-only tertiary road," but I would consider this a perfect example of highway=busway. I don't really see how I could possibly write a definition of busway to include

From looking at your example it seems the East Busway in Pittsburgh is such a coherent system of dedicated bus transit that it qualifies as BRT and would be covered by this proposal even if the scope was narrowed. Here's the current tagged bus infrastructure in my city. Ways like this are just extensions of, or converted parts of, a regular residential road. They fit into the road network and sometimes they are even turned back into a regular street when bus lines are replanned (see object history). The only change in this case was to remove the bus-only signs which is the same as changing the access tags. The road didn't magically turn from a highway=busway back into a highway=residential because those signs were removed. There is a difference between dedicated busways for BRT and bus-only roads that exist as part of the regular road network and this is why I can't support this proposal in its current form. --Riiga (talk) 20:53, 31 March 2021 (UTC)

I fail to see why service=busway is "more appropriate." This tag does not imply any other tags; it is meant to be used 'in conjunction with' access=no + bus=designated/private. Even now with service=busway as a part of the status quo, it is exceedingly difficult to form an Overpass Turbo query for busways without it yielding both false positives and false negatives.

This proposal will create a duplicate tagging scheme for the same feature.

On the contrary, by deprecating a tagging scheme that is applied incorrectly and inconstantly and replacing it with a simpler one, this proposal would decrease the level of variance in the tagging. —Colgza (talk) 17:46, 11 April 2021 (UTC)