This page guides on the definition of land use and how it should be mapped.

Land use, as the name suggests, describes what an area of land is used for e.g. housing, commercial activities, farming, education, leisure, etc.

Many feature tags imply both a landuse and a landcover. For example, landuse=vineyard defines an area covered in grape vines and used to produce grapes.

As OpenStreetMap has evolved over time, land use is now mapped with a variety of tags including landuse=*, amenity=*, leisure=*, and tourism=*. See the table below for examples.

Generally a piece of land is tagged with one land use only. Sometimes mappers give more detail within a larger area. For example a leisure=playground tag may be used on a playground that is fully contained within a particular landuse=residential area.

In addition, areas with tags indicating land use will in some cases intersect. See for example intersection of landuse=military, landuse=forest and protected area.

How to map land use

Land use by its nature is an area. But if it's not feasible to map a land use as an area, then it might be mapped as node and updated to an area later. For example it is preferable to map landuse=cemetery as node rather than to skip it.

When first mapping a place many mappers draw large uninterrupted shapes around areas that are assumed to have a single land use (this technique is suggested on LearnOSM.org). Typically these areas might be tagged with quite broad uses such as landuse=commercial, landuse=industrial or landuse=residential (where this is discussed further).

While this is useful as a starting point, it quickly becomes necessary to break these areas down to add more detail to the map - for example to add schools, health facilities, parks etc. into broad areas initially outlined as residential.

Mapping land use in more detail

There are two main approaches to mapping land use in more detail. They differ primarily in how they treat land dedicated to the public highway or other transport networks.

1. Mapping the reality on the ground 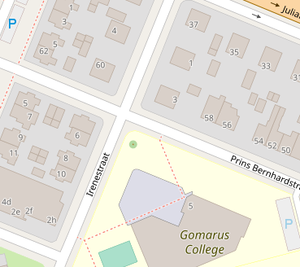 An example of a school and blocks of houses mapped separately, with the borders following the actual limits of the cadastral lots that in this case match usage on the ground.

The key to this method is to strictly draw the boundary around each land use following its boundary in the real world. For example to map the land use of a school draw the edge of the shape following the boundary of the land that is used by/available to the school; to map a residential area include land that actually belongs to the houses and their gardens/private driveways.

Land that is dedicated to the public highway (both the carriageway and the pavement/verge) is not land that is available for other uses i.e. you can't build a house on it, and so it shouldn't be mapped as such. While a landuse=highway tag has been proposed it is not currently in use and so land used as public highway should simply be left blank.

Another approach that some mappers have taken is to either draw land use polygons that extend over the public highway sharing nodes with highway centrelines, or to fragment the highway network and create land use areas from relations of the fragments. While this results in less drawn geometry subsequent editing is more complicated. This increases the risk of damaging not only the land use areas but also the highway network. It is also less accurate, extending adjoining land uses over land that is dedicated to the public highway.

How to tag land use

Note that there is an ongoing discussion on how to tag some types of land use. See Proposed features/highway and Forest

Table of some existing land use tags

The following table is a 'work in progress'. Click on the symbols in the headings to sort the tables in different ways.

key:landuse values not used to indicate land use in all cases

Land use tags have been evolving over time and haven't always been used consistently. As an example landuse=forest has been used to indicate any tree-covered area rather than to indicate areas specifically used for forestry and the production of timber. In many cases these tags represent the landcover rather than only the land use.

National Land Use Database vs Openstreetmap

The following table compares land use classes from the UK National Land Use Database (NLUD) in Great Britain, and the commonly used land use tags on OpenStreetMap (mostly values of the key landuse=*).

If a tag sometimes describes more than one land use category, it is followed by an asterisk (*).

In many cases, a sub-category on the NLUD will be represented by several different features in Openstreetmap (for example, community services). In other cases, several categories may used the same tag (for example, landuse=industrial).

GB discussion on the mapping of land use and land cover

In March 2021 the subject of how to map land cover & land use features, in relation to adjacent highways was discussed on talk-gb. There was a wide ranging discussion, but no clear consensus about how the features should be mapped. Where those features border with a highway, the mapper should avoid using shared nodes if possible.