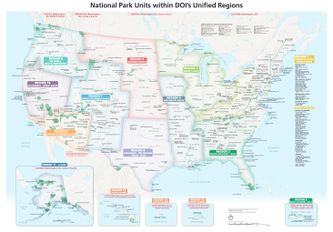 The National Park Service (NPS) is an agency of the United States federal government's Department of the Interior that manages all national parks, many national monuments, and other conservation and historical properties with various protection_title=* designations.

So for example, for a National Park, "adding together" the tags from the correct three segments of this wiki yields:

The important priority for tagging OSM's NPS administered relations is standardization. While this wiki comprehensively denotes NPS units grouped by protection_title=*, it defers tagging to the standardization at the Main article.

There is also US National Park Service Tagging, early in the process of being harmonized with the Main article. As a sub-wiki to that, US_National_Park_Service_Tagging:_Boundaries was created to recommend tagging for national parks, but that page was never updated from 2013, is now (2020) superfluous and should be deleted, having been superceded by (draft) tagging recommendations in the above-noted Main article.

There are 63 national parks in the United States. 59 of them are finished in OSM.

The National Park Service creates wonderful PDF maps of the parks. Harper's Ferry Center is a one-stop source for maps and park documentation. Some of those PDF documents are geospatial (geopdf) PDFs. Once they are converted into geotiff format, they can be used as a layer in JOSM to assist entering data. Use the US National Park Service Tagging as a guide when using National Park Service PDF maps to enter points of interest (POIs) into OpenStreetMap.

National Park Service GIS Data is available for download. GIS data from the NPS is public domain. However, any large-scale import of data should follow the Import/Guidelines.