Are you new to OpenStreetMap and would you like to help us improve the map of New Hampshire? See the handy Beginners' guide for new mappers. This page contains useful information about what has been mapped in New Hampshire and general local information.

In OSM, roadways are primarily categorized using a highway=* tag that indicates the roadway's importance in the road network. Because OSM is a global map, it is important that there is consistency locally, regionally, and globally in how roadways are slotted into the 8 highway=* levels the general-purpose road network:

It is important to note that the values of the highway=* tag come from the British road classification system, but, globally, they are applied as hierarchy of descending importance with highway=motorway being the only level that demands compliance with physical construction standards. All lower levels from highway=trunk to highway=residential are based on their importance to the road network.

The top category, highway=motorway should only be applied to roadways that are either signed Interstate highways or have ALL of the following characteristics:

The only roads that should be tagged as highway=motorway in New Hampshire are the Interstates (I-89, I-93, I-95, I-293, I-393), non-Interstate highways built to the same standard (NH 101 between Manchester and I-95, the Spaulding Turnpike, and the Everett Turnpike), and short spurs from these ways like Hudson's Circumferential Highway. Other roadways that meet some, but not all of the criteria (such as NH-101 near Milford) should not be tagged with highway=motorway, but rather another highway classification that represents their importance in the regional road network, with expressway=yes and access_control=partial to indicate their enhanced level of construction.

In and around New Hampshire, the list of cities of regional importance includes:

Therefore, the following routes should be tagged as trunk:

Also, being a state with 4 neighbors, there are roads that do not connect urban areas within New Hampshire, but do provide important connections for residents in other territories. These include

The trunk classification may also be used within urban areas themselves. A trunk road in an urban area should be a partially controlled access highway or expressway. Examples of these kinds of highways include:

This second-level of non-motorway roads should be applied to US highways and higher-importance state routes that aren’t highway=trunk. As a guide, many Tier 2 roads (statewide corridors) should be tagged as trunk or primary. Examples of state routes tagged as primary include NH 106 south of Laconia, NH 28, NH 111, NH 104, and NH 25). Also some extremely important urban streets like the Daniel Webster Highway in Nashua and Granite Street in Manchester should be tagged as primary.

This categorization level should be applied to middle-importance state routes and very important urban streets. This would be most state highways that do not have a higher-level classification. These roads are often built to lower standards that the ones above. Examples include: NH 107, NH 109, and NH 132. Bridge Street in Manchester is an example of a very important urban street that is not a state route tagged as secondary.

Unnumbered state roads (identified by the begin and end state maintenance signs) and important through roads in urban compacts. Unnumbered state roads can begin and end in places that are not intersections, and tertiary classification should be carried in a way that makes sense to a nearby road of equal or higher rank (for example Canterbury Road in Chichester is only a state road for a mile or two, but it is classed as tertiary all the way to King Road and Main Street). Some alternate state routes that only serve one community should also be classed as tertiary, for example NH 113B in Chatham.

These are roads that serve no connectivity function to motorized users. There are three types of road that should be tagged as track in New Hampshire. 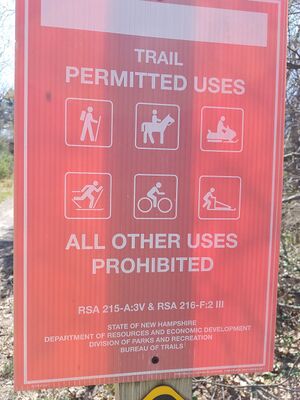 A typical access posting on a Bureau of Trails trail

The Bureau of Trails (BoT) maintains a network of trails through the state. Some of this is on private land, and each landowner can post restrictions on the trails if they want. The most common tagging scheme for BoT trails on private land is highway=path + access=permissive + snowmobile=designated + atv=no + motor_vehicle=no. The BoT also owns trails outright and regulates access to them. These should be tagged with highway=path + foot=yes + horse=yes + bicycle=yes + snowmobile=yes + ski=yes + bicycle=yes + dog_sled=yes.

Limited-access highways (those marked with the standard white sign seen entrances to freeways and turnpikes and on whatever other road a government choose to place it) should be tagged with foot=no + bicycle=no + horse=no + moped=no. The standard sign also bans motor scooters, but there is no currently accepted tag for handling motor scooters, and state law never defines the term anyways so it is unclear how they differ from mopeds.

Other Roads and Paths

Not all roads are part of the general-purpose road network. In addition to those above that are usually (though not always) publicly accessible and maintained, there are also highway=service roads for accessing buildings and facilities, and other special-purpose roadways such as highway=raceway. See highway=path for "roads" that are intended for non-motorized use.

Due to the cost of road maintenance, there is a strong financial disincentive for New Hampshire towns to take over responsibility for small residential roads that only provide access to a few residences. As housing is built in an area the new roads default to being owned and maintained privately. These roads may be named and signed for wayfinding and E911 purposes, but their signs will include a "private" or "PVT" label, or be colored differently, to indicate that they are privately owned and maintained and that the Town is not responsible for their maintenance. Roads designated as "private" in this way should be tagged with ownership=private. Residents can petition their Town to accept a road, which would then lose it's "private" label and become ownership=public or ownership=municipal. Named private roads that serve 2 or fewer dwellings or businesses should be tagged as highway=service.

In contrast to this ownership and maintenance label, some roads may be signposted with signs say "No Trespassing", "No public access", "Keep out", or similar wording -- these should be tagged with access=private to indicate that the public is not allowed to use this road. Do not add access=private to roads simply because they are privately owned and maintained.

New Hampshire is adjacent to the states Massachusetts, Vermont, and Maine in the United States as well as the Quebec province of Canada.

Also see the list of border relations for New Hampshire.