There is a mailing list for discussing US-specific issues. It is the best place to find other US mappers.

Initial TIGER imports contained quite a few duplicate counties in Pennsylvania. These have now been fixed. Some counties require extensive review as ways do not correspond to aerial imagery, or are over-connected or otherwise badly proportioned. Correcting these issues is a relatively easy way to get involved in improving OSM, yet tremendously helpful. There is an extensive guide to improving the TIGER import.

The Pennsylvania Spatial Data Access (PASDA) site has high-resolution images of the entire state from the PAMAP program.

At PennPilot, there is aerial photographs of Pennsylvania in the 20th century. 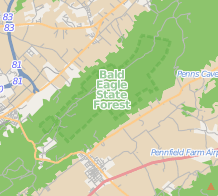 The PASDA site has lots of data from the state government we can use, including State Parks, State Game Lands, and State Forests. Some of this data was imported late 2007 by Adam Killian.

Though an initial, guesstimated value of landuse=forest or natural=wood may be appropriate for these areas, you are encouraged to map the park boundaries orthogonal to the actual land use. This means that park boundaries should be tagged as boundary=national_park with admin_level=4 (state-level), with appropriate tags for the park type. The actual land use should be surveyed or may even be determined from hi-res aerial imagery in the case of a forest. See the image to the left for an example: the green area (forest) extends beyond the state forest boundary, marked by the dashed green line.

The data is in shapefile format. Here is the process Alexrudd used to manipulate one.

At PennDOT PDF maps, there are several different types of maps of PennDOT infrastructure.