We use relations to represent complex features like routes and jurisdictional boundaries. There's a wealth of information at these two pages:

A number of aerial and satellite imagery layers are available in iD, Potlatch, and JOSM. The default layer in iD and Potlatch is Bing Aerial Imagery, which you should generally avoid due to its age, except in some urban areas. Check the vintage of an OSM feature before remapping it based on older aerial imagery – a lot can change in a year or two. To keep other mappers from "reviving" a demolished building, change its building=* tag to demolished:building=* instead of deleting it.

When mapping a tall building or a road in a hilly area, choose a well-aligned, high-resolution layer to draw the building footprint with minimal skew or offset, then switch to the most current layer to look for any additions or demolitions that may have taken place recently. When mapping in a wooded area, choose a leaf-off layer so you can easily see through tree cover. When mapping bodies of water, choose a leaf-on layer, which is more likely to show the low-water mark.

This table of corn mazes gives a good idea of the vintage of each aerial imagery layer by county. The Bing aerial imagery analyzer is another tool for determining Bing imagery vintage, although these days it only reports a very broad date range. This Mapbox layer indicates the vintage of NAIP in a given area.

The Ohio Statewide Imagery Program (OSIP) also publishes 3-inch orthoimagery from 2018 and 2019 for several counties. The 3-inch imagery is newer and higher in resolution than both Maxar and Mapbox, but no public Web service exists for it. AdamP hosts some of this imagery for local mappers; ask for details in the #local-ohio channel of OSMUS Slack. To use other OSIP imagery in an editor:

Mapillary covers major highways in much of the state, major roads in Columbus and the northeast, and every nook and cranny in north-central Ohio. OpenStreetCam has more recent coverage along the Interstates and has similar coverage of north-central Ohio.

A number of datasets are available for importing.

Several Ohio universities and libraries have pages that are excellent starting points to discover data that can be added.

Active mapping communities have sprung up in some of Ohio's larger cities. Mappers in the Cleveland area have organized through Open Cleveland and Open Geo Cleveland. Organizing real-life meetups is a great to way to attract more mappers in your city!

If you have questions, these mappers may be able to help you out. (Let everyone know where you like to contribute!)

Find non-wiki-using mappers using Who's around me? And be sure to subscribe to the talk-us mailing list, where the broader U.S. mapping community discusses tagging, imports, policy, evangelization, and more. If you have any questions, you can also ask on the #local-ohio channel of the U.S. community's Slack workspace (invite yourself).

OpenStreetMap's coverage of Ohio may have started mid-2006, with an import of TIGER 2005 street data for the Greater Cincinnati Tri-State area in response to a request by Teratornis. [6] If the import did make it to Cincinnati, it was later purged due to widespread quality issues. Aside from that, Ohio was mostly blank, nothing but I-70 west of Columbus, I-75 north of Wapakoneta, the Ohio Turnpike west of Toledo, other Toledo highways, I-76 west of Youngstown, and the City of Berea.

In 2007, Dave Hansen and others imported the same street data that was previously requested (Greene County was imported twice). Yellowbkpk imported county lines from the USGS in 2008, and Chris Lawrence imported TIGER 2007 city limits the following year. USGS GNIS imports provided airfields in 2007 and various other points of interest in 2009. The EPA hazard import was largely deleted except for an area surrounding Cincinnati and Dayton, where the imported points were eventually cleaned up and updated.

Ohioans appear to have begun contributing to the map in 2008 and 2009. With help from out-of-staters, we've cleaned up all kinds of issues, such as outdated streets and overlapping county lines. In particular, NE2 added virtually all state and U.S. routes to route relations and cleaned up many railways throughout the state.

In 2012, students of GeodSciE 607 and Geography 688 at Ohio State made many improvements to the map. Later that year, a tweet comparing OSM's coverage of Bowling Green State to various commercial map services went viral. The global OSM community swarmed in, fully micromapping Bowling Green in a matter of days.

Since 2012, some students of GEO109 at the University of Kentucky have also helped map the Greater Cincinnati area.

In 2018 and 2019, Cincinnati-area mappers imported buildings and addresses in Hamilton County.

OSM in the wild

See also: Cincinnati#OSM in the wild

Here are some statewide and regional items that need attention. Feel free to add your own:

We use ODOT's three-letter county abbreviations for various purposes. For most counties, the abbreviation consists of the first three letters of the county's name, but there are exceptions. [12] 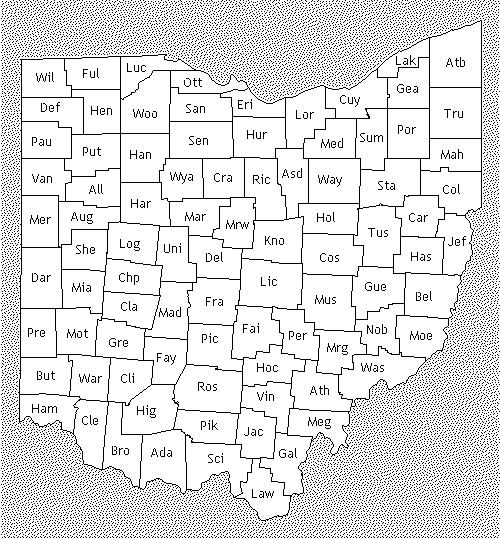 There are also standard township and municipal numbers within each county, but we don't currently use them for anything.