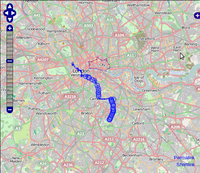 The bus route relation 36052 example(marked in blue) where all bus stops are not part of ways, but beside the way. This bus route is inside London and its bus number is 12.

Buses, coaches and trolley buses are forms of public transport that operate mainly on the road network. The system consists of bus routes calling at bus stops and bus stations and have a number of related features.

The common way to map bus stops is using a node with highway=bus_stop beside the highway at the point where passengers would wait immediately prior to boarding the vehicle. This may be in a suitably positioned bus shelter, or by the bus stop pole. It might be a few meters from the point where one enters the vehicle. Add the name of the stop (as it appears on the stop, or on a timetable) using name=*. Many mappers also add public_transport=platform, which can also be used for all types of public transport. Some mappers use bus=yes with public_transport=platform to specify a bus stop, instead of or in addition to highway=bus_stop

Bus services are mapped by marking all elements that belong to a route on members of a relation. This includes all the road segments (ways) the bus runs along and the bus stops (nodes or sometimes polygons) the route serves.

Use one relation per direction (also called variant) of a service route, tagged with type=route+route=bus/route=trolleybus.

To hold the variant bus relations together, another relation is used with type=route_master+route_master=bus/route_master=trolleybus. 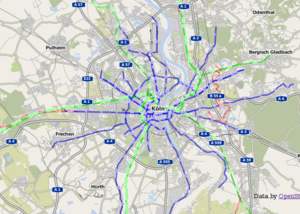 Öpnvkarte.de (or openbusmap.org) shows bus routes, as well as rail and tram e.g. here in Köln

To identify a bus service as part of a bus network, use operator=* and network=* tags.

Buses generally run on normal highway=*[3] roads, but sometimes have special provision made for them.

There are two schemas in common use in OpenStreetMap for representing bus lanes on normal roads: the busway=* (or bus_bay=*) scheme which indicates the presence of at least one bus lane (or bay) on one or more sides of the road, and the lanes:psv scheme which provides a count of lanes reserved for public service vehicles (which include buses) and their directions. Both schemes are compatible with cycleways. Both can be used at the same time; for more information see Bus lanes.

The two commonly used schemas suffice for most maps. However lane-specific information applicable to bus lanes can be captured too with the advanced :lanes suffix.

It is useful to provide access=* and maxheight=* tags for ways which include bus lanes, where appropriate. For Trolley buses the wires should be included using trolley_wire=yes.

Adding a bus route to OpenStreetMap

Bus stops should, for more simplicity and ease, be added as a node at the location of the pole or shelter. Some stops have been added as ways or polygons, which is completely valid, however, adding the stops as nodes keeps the route cleaner and easier to maintain.

Some people use stop position nodes on the way covered by the route as well as using a node beside the road. Using a public_transport=stop_position node on the highway can be useful in some rare cases, but is usually unnecessary. The simple and encouraged way to add a bus stop is as a node at the location of the pole or shelter.

Add the following tags to the bus stop:

After ensuring that each bus stop is present, move on to step 2.

According to the PTv2 schema, one relation must be created for each variation of the route. For example, a bus route with both Northbound and Southbound buses should be mapped as two separate relations. If the bus route is a loop, only one relation is needed. If the bus route has some buses that start out half way through, serving only the second half of the route, but following the same route as other buses, a separate relation is needed for that variation.

To create the bus route relation for one of the directions the bus travels, select the first stop that the bus stops at and create a new relation from it.

To create a bus route for the weekend/weekday variation of the route, use the opening_hours=* key to differentiate between the variations.

Add the following tags to the new relation:

Adding bus stops to the relation

The next step is to add each bus stop to the bus route relation in the correct order with the role "platform".

To add a bus stop to the route, select that bus stop, and then click the plus symbol near the bottom under All relations. Then, choose the relation that you have just created, add the stop to the relation, and set the role to platform.

If the stops or roads have been added in the wrong order, they can be dragged and dropped into the correct order.

Some platforms / bus stops have entry only/exit only restrictions. For those cases, use the roles "platform_exit_only" and "platform_entry_only" instead of the role "platform".

Adding streets to the relation

The final step is to add the streets covered by the bus route in the correct order with empty role "".

Many data consumers, including OsmAnd, are able to use bus routes without any streets added to the relation - only stops. Adding the streets is recommended, but not mandatory.

To add streets to the relation properly, select the first street that the bus drives over after leaving the first stop in the route. You may need to split the street to only select the part of it that is covered by the bus route. Add the first street covered by the bus route to the relation with an empty role. Then, add the next street covered by the route, and then the next, all in the correct order. Adding the streets in the correct order is just as important as it is for the stops. Using the roles "forward", "backward", "both", "North", "South", "twice", or any other role is invalid. Each street must be added with an empty role (""). Sections of the route where one can board or leave the bus by giving a sign to the driver instead of waiting for the next stop can be marked with

hail_and_ride.[4] The direction that the bus travels on the way can very easily be found by a computer (as long as the member ways are connected), and using roles other than an empty role for streets covered by the bus route is therefore both unnecessary and invalid.

The relation is now finished.

No route master relation is needed if the bus route is a loop, and therefore only mapped with one relation (and given the tag roundtrip=yes).

Route master relations represent all variations of a single bus route, not a network of bus routes.

Add the following tags to the route master relation:

Add the child bus route relations to the route master.

Removing a bus route from OpenStreetMap

When entire lines disappear their route_master and route relations are deleted. Unless the bus stops have also been physically removed, they should not be deleted. If they are renamed and/or their identifier changes and it's obvious that it's all based on an already mapped predecessor, you could 'reuse' the relations. There is no good way to indicate when the new situation starts or the old situation ceases.

The following sites render bus routes (based on relations data)