This guide was created to standardize the names, labels, classifications of roads and streets to create a map of Colombia that is usable, detailed, clear and consistent.

Before mapping and editing in OpenStreetMap it is good to read:

Tags of roads in Colombia

The highway classification in Colombia is done by the Transport ministry and Invías who based on functionality, traffic volume, population, and travel length criteria, among others, categorize the highways in first, second and third order.

There is not an absolute agreement about the tag usage. Some points are described in the mail list.

This classification is also described at Highway:International equivalence.

National highways and other highways with an identifier assigned by a government agency use ref=*. For example, the segments of National Highway 50 are tagged like this:

Considerations for the ref=* tag usage:

Traffic signs are mapped with a node

at the location of the sign, using the tag traffic_sign=* according to this traffic sign list (es). More important than mapping the sign itself is to apply the corresponding tags to the objects the sign affects. For example, it is good to map the speed limit signs, but it is even more important to apply the maxspeed=* to the affected highways.

, for example) you can see the Related tags in the traffic signs (es)page. If you have doubts, please follow the link of the related tag for more information about it. You can also find useful information at traffic_sign=*.

Alternatively, the number sign (#) is abbreviated as No., but we do not use that here. In theory, number1 refers to the previous intersecting street, and number2 is the distance to that intersection. In the previous example, the address is on Calle 72, 12 meters away from Carrera 7. Of course, the real world does not fit the model so nicely, but that is the general idea.

Outside of cities where streets aren't numbered, addresses can be expressed by stating the nearest milepost and the name of the road, e.g. Km. 25 Autopista Medellín. Alternatively, a higher approximation can be given using meters, as in Km 25+500, meaning 500 meters past mile marker 25. Since the addr=* schema doesn't quite work for these cases, addr:full=* can be used instead.

More tags that can be useful/necessary:

When possible, you should add these tags to the area you draw for the building, using for example the building=residential. Sometimes more than one building has the same address; this happens with condominiums were a group of apartment buildings share the same front gate (and one address). In this case it is probably best to draw a polygon around the condo and tag as landuse=residential and then add a main entrance node on the line of the polygon with tags entrance=yes and the address details. Additionally you can then draw the buildings and tag them building=apartments but do not also add the address tags to them.

You can also check this page: Geocoding_naming_formats_and_challenges#Colombia.

Post codes were introduced recently in Colombia. Although not widespread used yet, it is worthwhile to add them to OSM. Post codes have six digits, the first two being the department, the next the two postal zone, and the last two the postal district. All post codes and their district boundaries can be found here. They can be added to the address using: addr:postcode=*.

There are postal codes with more digits that correspond to the blocks (manzanas) in a postal district, but they should not be used in OSM.

The article Colombia/Transport explains in greater detail how to map the different elements of bus public systems (like the SITP in Bogota), or Bus Rapid Transit

Previously, BRT ways was mapped with highway=service; however, they have to be updated to the new tag.

Generally, the bicycle guide can be used for mapping bike lanes:

For cycleways that lie separated (by grass, kirb, etc.) from the road, now there are two conventions in use in Colombia (and the rest of the world).

Often cycle ways have different directions than the part of the road used by cars. The general wiki provides a good guide for all different possibilities.

In many major cities in Colombia, certain roads are closed to motorized traffic on Sunday mornings for the citizens to bike, walk and exercise (see

In Bogotá, for example, the roads that are closed on Sunday morning can be found on the website of the IDRD [1].

This is the list of main rivers in Colombia (es).

In order to map trees in Colombia, take into account that the vast mayority of them is broad leaved leaf_type=broadleaved. This makes easier to map natural forests. Some examples of this kind of trees are:

With a lower quantity, there are needle leaved trees leaf_type=needleleaved. They are the trees with no flat leaves. Some examples of this kind of trees are:

From the leave cycle of the trees, because Colombia is between the tropics, it does not have sessions. For this reason, the trees are always green, using this tag: leaf_cycle=evergreen.

The National Parks are tagged with boundary=national_park. This page describe the ES:Nacional Parks (es).

To draw the parks or get extra information, these sites can be used:

The tags for the boundaries of the department is:

Inside the boundaries, a point should be mapped and tag it like this:

For other administrative boundaries, you can see the admin_level tag documentation to identify:

bahareque (es)." Even if this material is not by default option in the building:material=* tag, it can be used like

wattle. This is the result of a question about materials.

Use of the building tag

The building=* tag only represent buildings or constructions. For this reason, using it in residential areas to depict blocks, condominiums, or other elements that are not themself a building, is considered as an error.

Also, it is considered as error to define the perimeter of an area where this area has multiple buildings; for example, the perimeter of a shopping mall that could have parking logs and access ways that give access to the building. Using this tag with the only purpose to make it appear on the map is considered tagging for the renderer. In these cases, consider to use an appropriate landuse=* tag: for residential areas you can use landuse=residential, and for the second case, you can use landuse=retail (see landuse=* for a complete list of common values for this tag).

Buildings where there are not high resolution imagery

In the case that there are not available high-resolution imagery, it is not recommended to create buildings, at least you have another data source at high definition. Remember to only map what's on the ground. To create an idealize version of the map cannot be verified, and it provides a misimpression that the map has a high detail level, when the reality is that the map does not correspond to what is seen from the ground. It is not necessary that the Points of Interest are well drawn as areas; using nodes with the appropriated tags for the Points of Interest on the map is perfectly appropriate, and in fact, it is equivalent to use an area, which concludes that added idealized building is just tagging for the renderer. 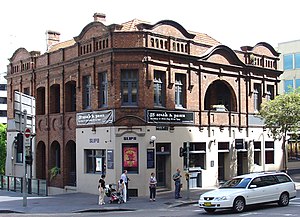 A building with mixed-use: being commercial in the first level, and residential in the upper level.

Do not map shops as

areas or buildings if they have multiple uses (For example, in areas of

mixed-use development). When several shops are in the first level of a building or area, do not tag the whole building or area like a shop. There is a similar case when there are different offices or businesses in the same building. In these cases, map the building like an

area with building=* and add a

node with an appropriated tag for the business or office. Applying tags like building=* or landuse=* with the solely purpose to make a business more prominent is considered as tagging for the renderer.

In Colombia, as well as in great part of Latin-America, the meaning of this kind of places differs from the common use in OSM and the English-speaking world. Then, tagging the "sites of couples dating" with tourism=motel is a mistake. For these places you should use the tag amenity=love_hotel.

The tag office=educational_institution does not correspond to the one for education institution (usually "primaria" and "secundaria") that is a term used in Colombia. For this kind of institution use the tag amenity=school.

In a similar way, amenity=college does not correspond to a "colegio". Those should be also tagged with amenity=school.

Even if the term "glorieta" or "rotonda" is used colloquially for any circular interchanger. the official definition as well as the formal definition of the junction=roundabout tag in OSM are not strict: These require that the traffic in the "glorieta" has priority over the entering traffic, making this last to yield ("la prelación está definida para los vehículos que circulan en la glorieta" —Manual de Señalización Vial 2004). This means the circular intersections that have traffic lights does not comply with this condition and should not be tagged with junction=roundabout. In the terrain, the "glorietas" that does comply this condition should have the traffic signals SP-20

in the entry ways.

You can use Bing images to map, because these images have a license that allow us to trace. However, these images could be misaligned to what is drawn on the map. To adjust the images you can use:

If you want to map buildings in details, yo can consult these guides: